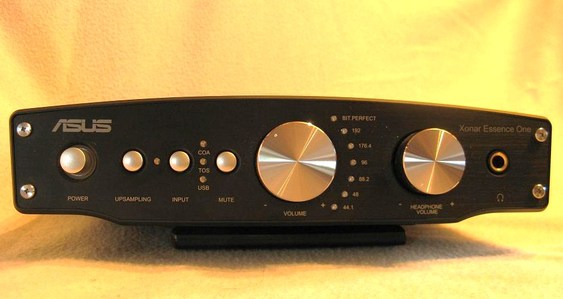 For the greatest majority of people ASUS means computers. This was valid until not long ago. Nowadays, ASUS, means also music. After all it’s not hard to believe that those that design and produce computers finally got to design the components that are used to convert the digital music into analog; the DAC.

Some time ago, Angelo Jasparro’s preface on the review of the MSB DAC was a matter of arguing; many  found his thesis correct and true but very direct and harsh in telling the truth. Angelo is a musician, so for him many things sound like an abuse, a violence against music. My position is very similar and maybe even more severe. I am into music too - as a singer of baroque and renaissance repertoire - and seeing hard disks full of art - music IS a form of art - makes me feel uneasy. Same thing applies to the free download of music from the Internet. Why should we pay hundred thousands of dollars for Lucio Fontana’s pictures and then download Beethoven’s Fifth Symphony for free?

But this is something that does not involve manufacturers that produce a device and are not responsible for their customer’s misbehaviors. 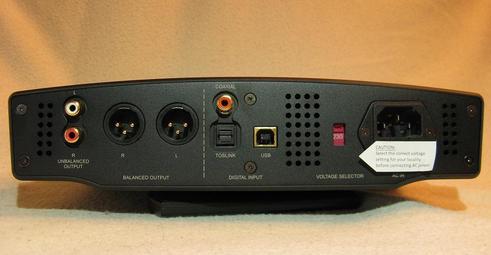 This DAC is very nice. Small and heavy. It has a whole series of functions that make it a complete device: balanced and unbalanced outputs, a very good internal amplifier for earphones, the ability to support many digital sample rates, oversampling, mute and preamp function. Well, for those of you that will decide to listen only to computer music, a PC and amplified loudspeakers, maybe wireless, will be enough to enjoy music in your listening room.

And maybe in this new vision of the world, a thorough exam is not necessary but I will do it anyway. The intention to bring music to everyone is clear, with all means and also with very advanced systems that audio dinosaurs like me hardly understand. Systems that maybe offer a less extreme quality of music.

As I said before, this component is very complete. It is a pre-amplifier and also a DAC with the volume control, because there is not a direct output. On the back we find the the IEC mains input, the USB port, the optical and coaxial input, balanced and unbalanced outputs. On the front, you will find the switch-on button, the mute button, the selector for the three inputs and the oversampling, the volume knob rounded by the display of the available formats, the headphone input with its volume control.


The internal DACs are developed by ASUS (C- Media CM6631 High-Definition Sound Processor) and are the best on the market for now (well, updates in this field are so swift that there is nothing certain, so take it as it comes!).

I had to download Foobar 2000 software before I could connect the DAC to my system: a Spectral DMC 12 preamp, Wyred4Sound ST 250 power amp (chosen because it’s a class D therefore somehow digital) and Audio Note AN E SPx loudspeakers. 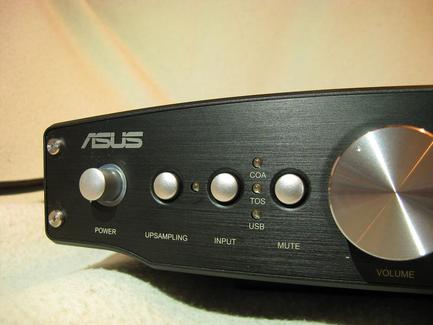 Well, after all we said, how does this DAC sound? The sound is good even if I think it’s better to use it as a preamp rather than having it followed by another preamplification step. The maximum volume may not be apt for all the power amps but I must say that Wyred4Sound gave me no problems even if the DAC volume knob was frequently turned at its maximum. Anyway, I missed no SPL since the system was aggressive enough with the right music.

The ASUS has a nice sound, it is very fast in locking the right sample rate and plays a relaxing sound that knows when to be dynamic. As I already said, I would have loved a fixed output, but even with the Spectral preamplifier, its characteristics remained quite the same.

When I first received it I connected the digital output of the CD player, using the Asus DAC as a simple external DAC with standard CDs. If compared with the integrated CD player, the sound of the Asus DAC is more mellow in the top range; or differently said, the high frequencies are somehow more delicate. The entire range is present and the medium and low range are well performed. Sometimes it seems that a little dynamics is missing but just because the Asus DAC is less coloured in the medium-low range than the internal DAC of my Pioneer Cd player. All in all, the Asus DAC does not lack in dynamics at all.

During this test I had once again the proof that a cable can change the final result; I know that many are skeptical but believe me it is true. Sometimes I ask a friend to change the cable so that I don’t know what is connected and ten times out of ten I guess right. That’s why I say that there must be something, I’m not a magician after all.

The new digital cable is a top range XLO, it changed the whole acoustic spectrum that was more defined and put in evidence the high range giving more air to the composition. All this if compared to my old PC cable that I have always used and also if compared to the Audioquest cable that was really expensive years ago - well, also the XLO is kind of expensive.

I set up the computer and start listening to music from that source. Here the change of the USB cable modified the situation. In fact, the DCS cable that Angelo Jasparro lent me made the sound more defined if compared to the sound obtained with the standard ASUS cable. The sound with high definition sample rates is really spectacular. With the Fantastic Concert by Annar Follosø (2L Nordic Sound) there is no dynamics shrinking, the timbral is rich and the orchestra results complete, also regarding the big percussions - the bass drum sound real, real in a way that is hard obtain in a recording - and all the colours of the orchestra are present and vivid.

Its sonority is amber like and this simply means that its upper part is a bit rearward and this results in a greater deepness of the soundstage with some instruments that sound rearward.

At a first listening, this device may sound less lively than other devices but it is not so. Quick listening sessions many times are not enough to understand the real value of an object. I personally prefer those components that show the differences in the various recordings, and the ASUS does this very well. With some files the sensation of a “solid” sound was really satisfying.

This is a DAC for long listenings, that performs well also with some recordings that are a bit “noisy” and that with other devices would result annoying especially at a high volume.

The cost of this DAC is around 900,00 euros, it is not something “just to begin with” but it’s a nice device, very well built, that wants to be your companion for a long time and if you like the sound, this DAC is your DAC.

Last but not least is the fact that a brand like ASUS gives guarantees and assistance.