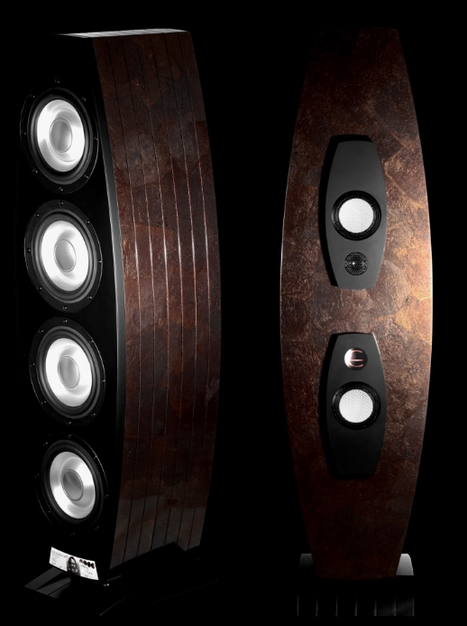 Between the second half of the 16th Century and the first half of the 17th, there was a scientist, mathematician, astronomer, who was up all sort of things. Among others, he invented the telescope and had a controversy with the Holy Office because he claimed that the Earth revolves around the sun and not vice versa. The result for having contradicted Aristotle: he was sentenced to confinement and forced to recant. Thank goodness that in 1992, Pope John Paul II recognized the “insignificant” error that the Church of that time did and officially apologized. Oh, by the way! His name was Galileo Galilei, born in Pisa, Tuscany, Italy.

A rather eccentric man and far too smart for the people of that time. I do not want to know why the Martinelli Brothers named their speakers after the characters that have shaped the history of Italy. And not only, as their new creature is called Copernicus. We are always in the field of science.

The Da Vincis have been reviewed by me some time ago and you can read about the excellent performance by following the link.

The Galileo is practically a Da Vinci grown up, that from the stroller ... uh, from the stand, rest directly on the floor. Doubled the midranges and quadrupled the woofers, they enter a market segment that looks at the real high-end, with their price, depending on the version , ranging from 30,000 to 50,000 Euros, approximately. At the end of the article we will specify the prices of the version we are testing, which are valid in Europe.

About Emmespeakers we have already discussed in two other articles, on the occasion of other reviews. We have been attracted by the Galileos since they were presented in Munich last year. Patience has rewarded us; we are in fact the first magazine to review the version with the diamond tweeter. This tweeter is something that has always impressed me for its very special way of sounding. I do not mean that it is colored or imposing its own timbre. I say that has a sweetness in the sound, a "softness" that seems to counteract openly with the stiffness of the material with which the dome is made, that you probably know is the hardest material existing in nature. Of course we talk about synthetic diamond, made in an interesting and well explained way by the the manufacturer Accuton at this link: http://bit.ly/1gGItcS

The tweeter employed in Galileo is a 1.2" dome diameter, much more expensive than the 1" one, commonly used, but also able to withstand lower frequencies, thanks to its Fs of nearly 300 Hz lower. 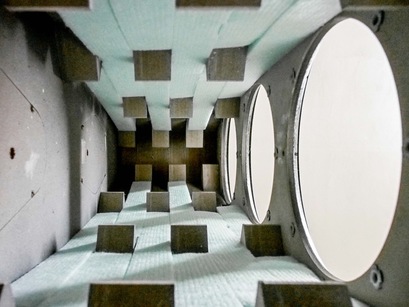 The presentation that follows was written by Galileo's designer:

“With the Galileo project we brought the DA VINCI concept to its top expression, and despite the dimensions, Galileo keeps the top features of DA VINCI in terms of speed, detail, focusing and huge soundstage adding massive presence and power handling, typical of full size speakers.

Thanks to its layout the acoustic center stays into 12 cm across the whole frequency response, and That is a great result for a speaker of 150 cm of height.

Equipped with seven drivers (one 1.2 "tweeter, ceramic or diamond as option, two 5" ceramic mid-woofers and four 10 "aluminum woofers on rear), GALILEO has required a deep study in terms of vibration and control of the stationary waves cabinet.

The issue Has Been solved thanks the manufacture method of EMMESpeakers, by layers, adding other new solutions. In few words, the GALILEO cabinet uses discontinuities of shape and material, the mass variation and absorbing, to keep under control all harmful vibrations.

Even on the BSSE GALILEO system (Box for Shaping Sound Enhancement), property of EMMESpeakers, plays a primary role to Shops provide the EMMESpeakers's sound and its typical wide soundstage.

As usual in my designs, acoustical crossovers are very low (150 and 1.5k Hz), to let the fastest driver (s) managing the signal.

Designed for wide rooms, GALILEO is portatili Provided for deep and "bodily" sound reproduction with no compromise, for whom-he likes to be immersed into the sound event, rendered with thrilling realism. 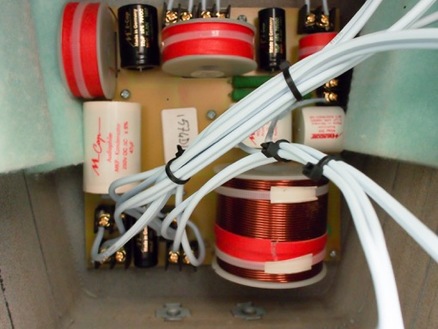 
The first thing that stands out is the speed of the ceramic midrange, which makes me think of the compression driver of my reference speakers. This speed gives the impression, and I notice it from the comments of those who are not used to listening with these speakers, to insist on certain frequencies, so that they seem to resonate in the mid-high range. In fact your ears adapt quickly and you soon realize that are the usual midrange cones to sound, often, slow and somehow "rubbery". And I suddenly recall the reason why I had chosen - years ago - for my reference system the Avalon Opus Ceramique loudspeakers, that did not make me regret the dynamics, the transparency and speed of the previous Martin Logan. The Opus were then replaced by the MBL 101Ds with their unconventional drivers,and at last the two phenomenal compression drivers of my JBL4350B entered my listening room. 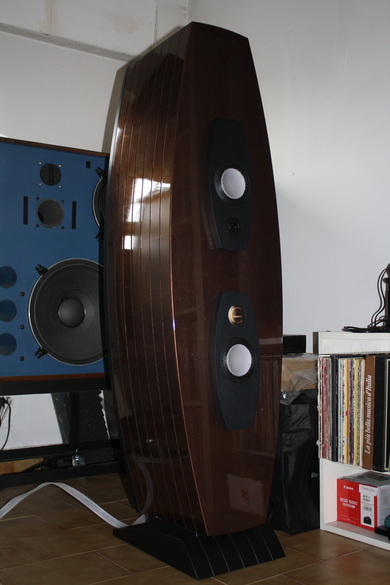 Today I received a new CD: "Across the Borderline" by Willie Nelson. I know that I am out of fashion but I still buy CDs; for me it is one of the few joys in life and I do not want to renounce to it. I think it's more exciting to unpack a CD than connecting a HD to my laptop. This CD is recorded with the usual high quality standard of Texan singer and songwriter. The voices of various duets present in the songs are very real and are presented on a background music that is always balanced in the levels and frequency response. The smoothness of the tweeters is evident, they reproduce even the ultra-sounds but they do it in a very correct and and at the same time graceful way, the deep low-range is perfectly controlled.

If you know someone who plays the electric bass you understand very well what I mean by "perfectly controlled". To someone, apparently, this expression evokes an anemic bottom range. Well, it is not so ... "Controlled" means that the lower notes don't go everywhere in your room and, therefore, remain intelligible and die naturally in the air, without bouncing everywhere, giving the impression of being endless.

Among the things I remember with most pleasure of the Avalon time, there is the sound of the percussions. Ceramic membranes have an amazing speed, matched only by the best compression drivers. While thinking this I put in the CD player the old, dear, "Buena Vista Social Club" (World Circuit), that is full of percussions. I immediately hear the skins of the congas; the maracas and the güiro are very present but never over the top, thanks to the strict control of the tweeter. The latter seems not to have to comply with the laws of physics, as if the dome had not its own mass. There isn’t, I do not hear it.

The Galileos return intact the magic and excitement of the Afro-Cuban music of which this CD is a great example. 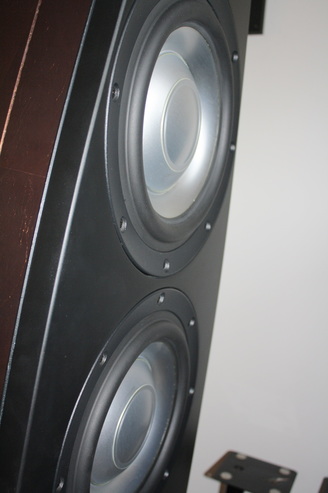 "The Moldau", from the SACD Dvorak-Smetana (Sony), performed by the Cleveland Orchestra directed by George Szell, is a symphonic poem that describes with the music the Boer river, with force and romance at the same time. This is a 1963 recording and its transposition on SACD gives a good idea of ​how the high resolution digital may well replace the analog sound. The EMMESpeakers give us beautiful strings: airy, extended in the high range but without any sign of harshness, even at high volume. The harp, over there on the left, plays quietly but with the "weight" that it should have in the large orchestra in real life. Double bass, even when playing pizzicato, are present in the right proportion and, when the timpani start to play, my room seems to shake. The soundstage, both in width and in depth, excels. It is very clear, after repeated listening, that a room bigger than mine would be really fit for these speakers.

It is in the low level signals where the ability of the ceramic speakers most stands out. They do not hide any sound or background noise, with the transparency of a studio monitor but not with a monitor overall sound.

While I am listening to this SACD I also listen the 7th Symphony by Dvorak, not as famous as the "Symphony from the New World", but also interesting and full of great ideas. If it were not for the dynamic compression due to recording and mastering, the illusion of being in front of the orchestra would be complete.

Last night I heard live in a Church here in Milan the "Vespers of the Blessed Virgin" by Monteverdi. The temptation to play it, once back at home, is irresistible. I'll use again the CD Archiv directed by Gardiner. What I am going to say may sound as a heresy: it is one of those few cases in which the music played by a good system exceeds in quality and emotional impact the live performance. Was it the fault of the Church, or maybe the position of the orchestra and chorus (I think that this is the case) …, the fact is that more than half of what they played or sang was lost and it was a big mental effort to complete it by memory.
Years ago I listened to the "Vespers" in another Church and things were completely different. Maybe just a doomed evening.

It is however confirmed, also in this listening, the extreme accuracy of the timbre of the Galileo.

Some time ago I was criticized by one of those classic "geniuses" from a forum, for having tested the low range of a speaker with a 6” woofer using the" Toccata and Fugue" by Bach, performed with an organ whit a 16' biggest pipe. Now, if one does not have enough brains to understand that if I wrote, as I wrote, that in that speaker the low range was very scarce, for what obscure reason I had to torture the poor, small drivers, with the 32' pipes? To tear them apart?

Today, there is the possibility to really listen to the lower keys, and I take the opportunity to listen to the CD "Mendelssohn - Complete Organ Music" performed by Giulio Piovani in which he is using an organ with 32 'pipes. And you hear it, oh boy if you hear it! Do you have in mind that sound that is so low in frequency that does not make your couch vibrate but shoots waves of pressure in your ears with slow movements so that you can almost count them?

In conclusion, I found myself facing two true champions. Outstanding for sound but also for the care and aesthetics of the finishes employed in their realization.

Champions that can safely be compared as for price range with the best brands in the world. But they can be matched to the best brands also for their sound. So if you want to escape from the usual patterns and think you evaluate something different, now you know where to turn without mistake


​Manufacturer: EMMESpeakers
Galileo Diamond MSRP prices: from 46.380 euros to 50.200 euros, depending on the finishes 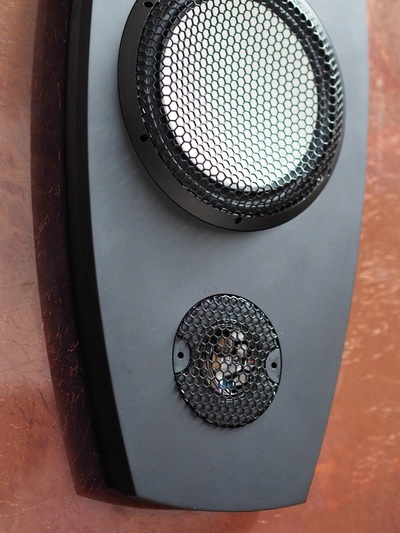 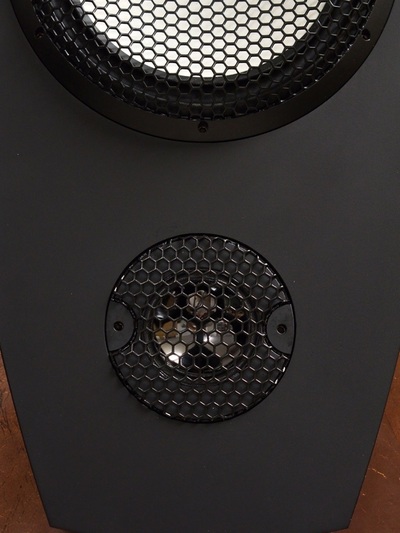 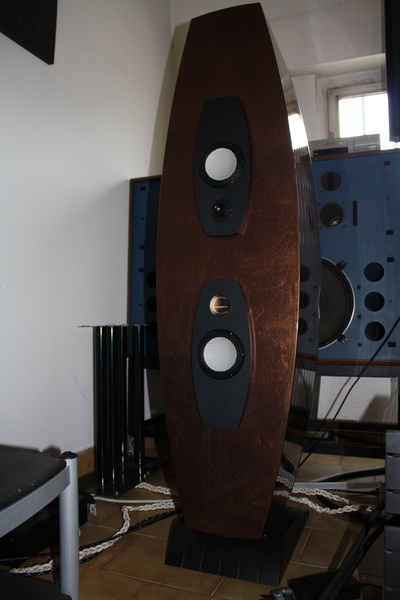 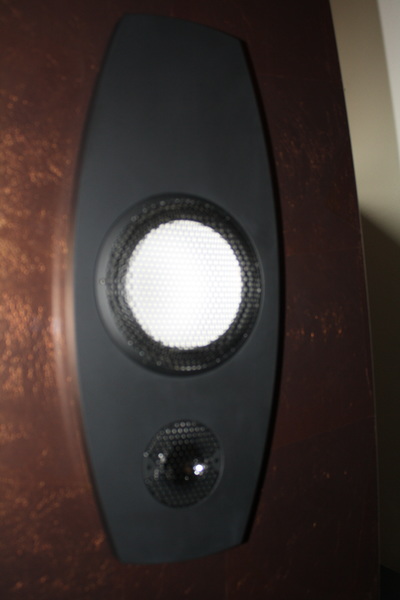 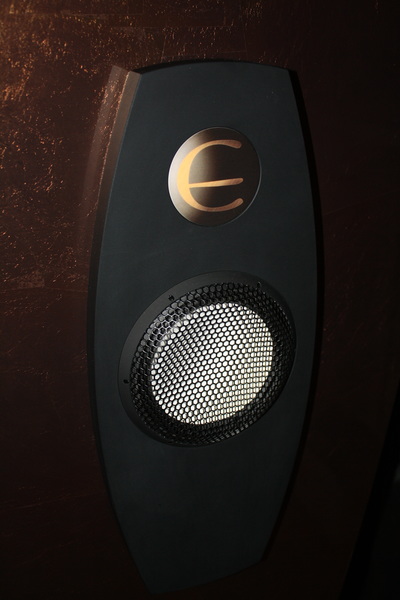 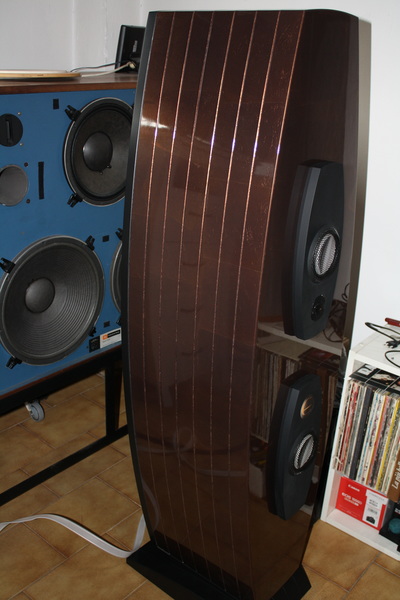 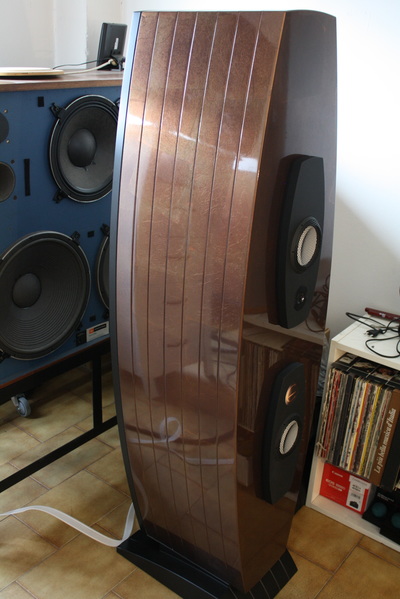 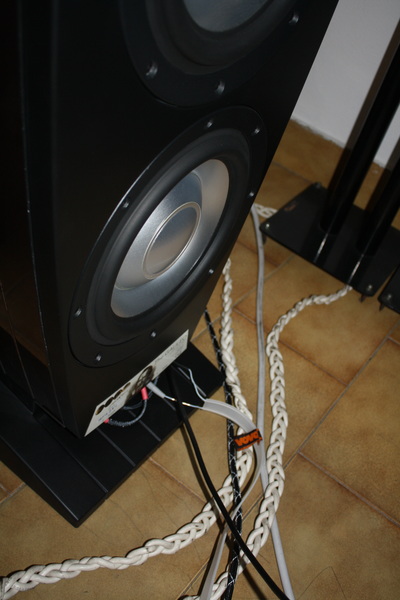 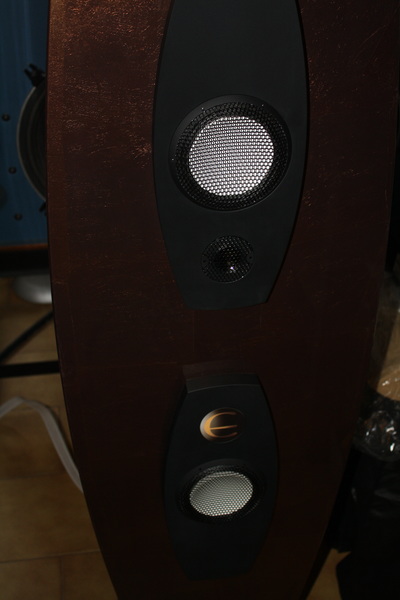 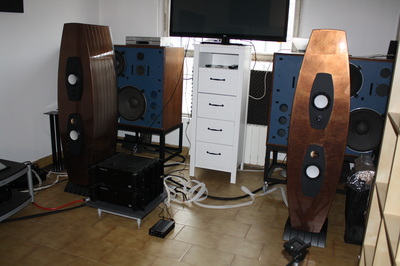 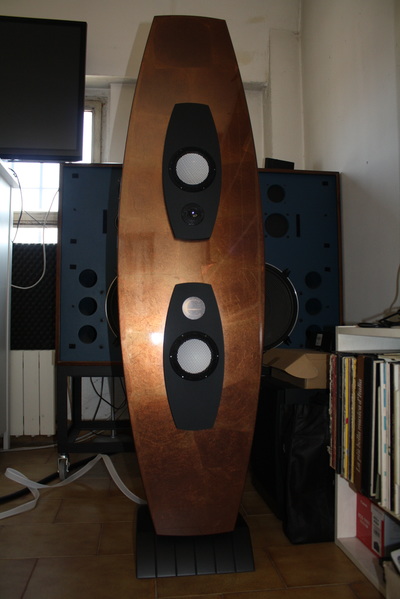 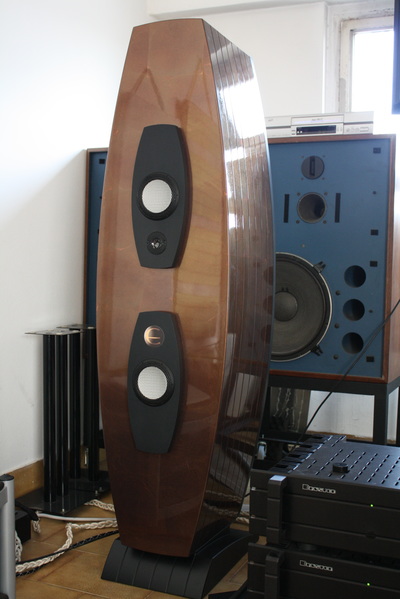 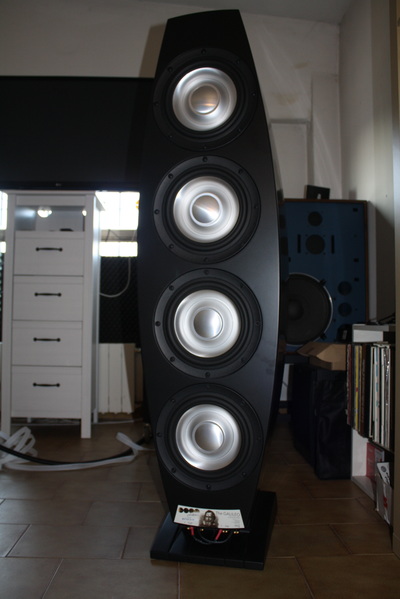 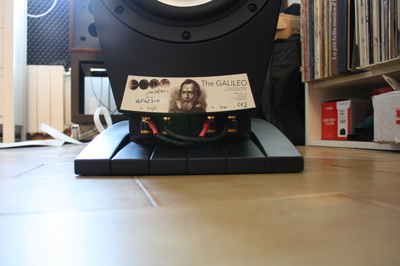 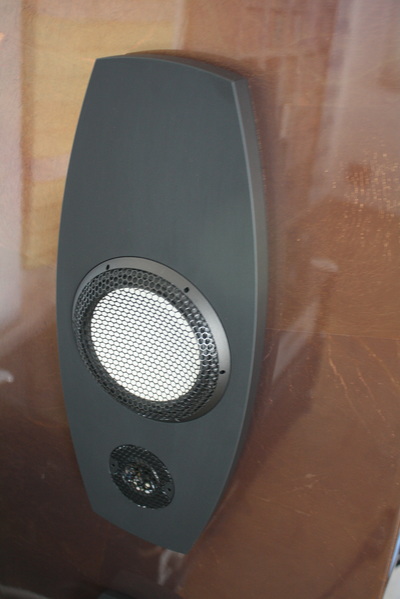 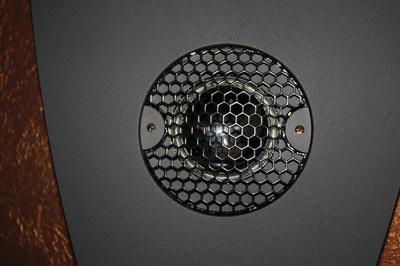 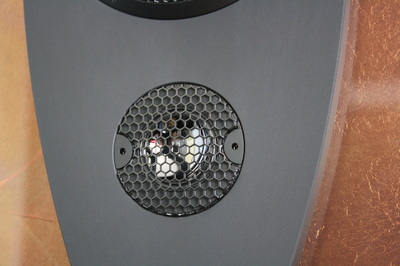 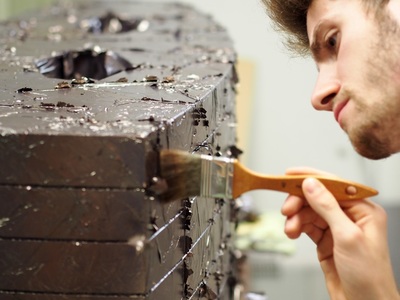 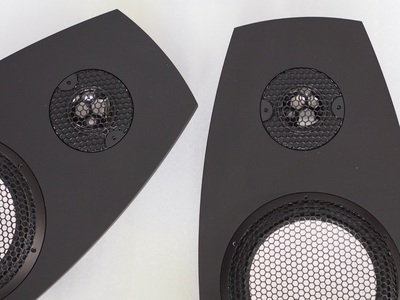 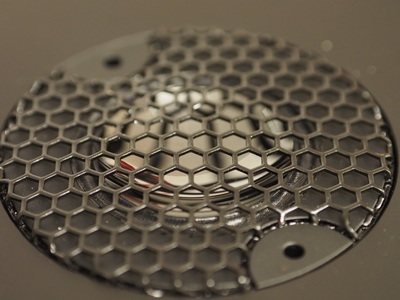 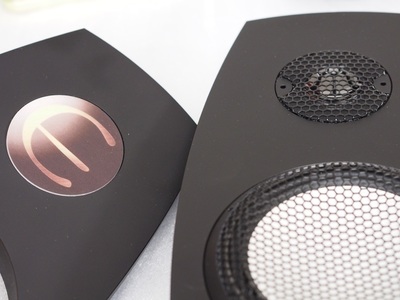 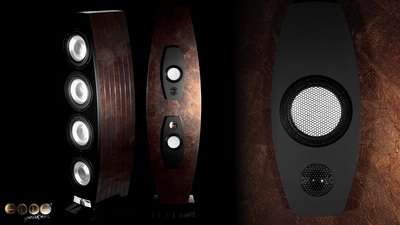 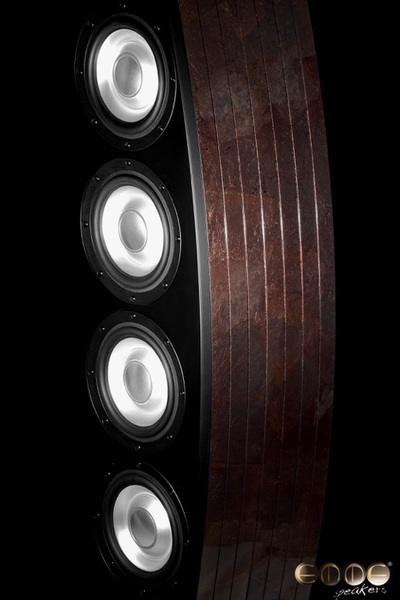