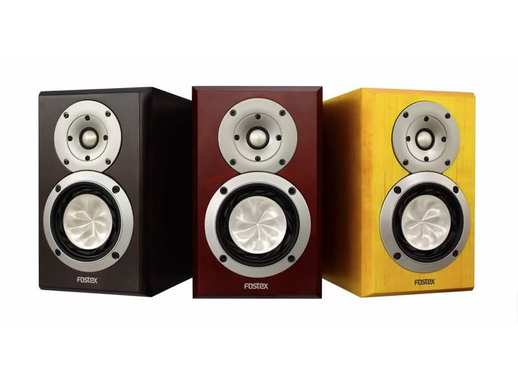 These small Japanese loudspeakers - GX100 - are now available in many Italian shops.
The MA is the cheaper model but there is another version that is more accurate in the finishing and costs about the double, named “Limited”. I read about them in many fair reports and comments were always positive; then, one day entering my favorite Hi-Fi shop I spotted these small red loudspeakers. They were playing a pop/jazz song and the voice of the singer sounded very natural. I sat down and listened for a while.

I immediately noticed that the amplification was not fit for the loudspeakers; it was a Leben amplifier that is an excellent device as for the timbre but it is not powerful enough for the GX100. Despite this, the sound was really interesting. So I said to myself: I want to listen to them at home; and here are my listening notes. 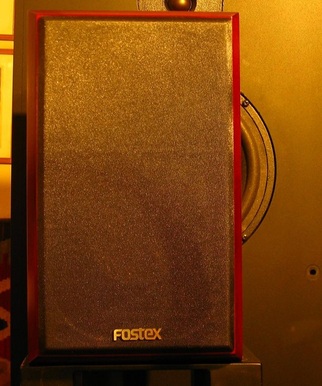 Fostex GX100 MA
It is not easy for me to give a brief description since the user’s manual is in Japanese, a language that I do not know. I can say that the loudspeakers are really small, 26,2 x 16 x 22 cm and weight 5,6 kilos each. These are two way loudspeakers with a 10 cm aluminium woofer and a 2 cm magnesium dome tweeter, with a (low) sensibility of 82 dB, a declared frequency response at -10 dB from 55 to 45.000 Hz, a reflex port in the rear side, a couple of binding posts and no bi-wiring, a tweeter control that envisages an intervention range between +1 and -3 dB. The finishing is really accurate; they have a protection grille that does not interfere with the sound (anyway I suggest to remove it especially if the loudspeakers’ position is similar to the one I have adopted in my listening room, to have the best result. In fact every review must be contextualized keeping in mind not so much the tastes and preferences of the reviewer but the listening environment characteristics and the system connected to the device.) 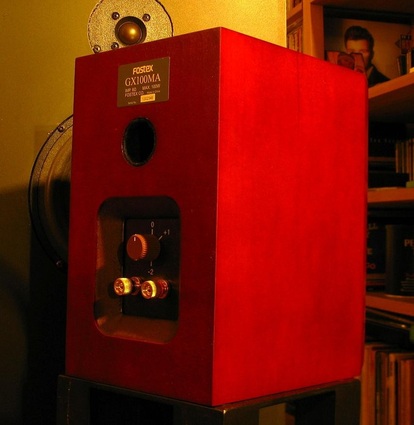 The system to which the GX 100 have been connected to is the following: Bauer Audio DPS2 turntable, Morch tone arm DP 6 with Precision Red armtube (I used a Nanotec cable between arm and pre-phono, the PH 2/S of which I refer here below), American Hybrid Technology -P phono preamplifier, line preamplifier Lavardin 6.2, power amplifiers Spectral DMA 50 and Wyred 4 Sound ST 250, the Audio Note AN AN E Spx speakers and the wiring repeatedly cited in my previous reviews.

Fostex gives specific instructions about the positioning of the loudspeaker in an environment: the loudspeakers must be put at 5-10 cm from the back wall and with an angle of 15° towards the listening point. I have tried of course but in my room this positioning proved to be good but not as much as that adopted during the test. If the loudspeakers are positioned following Fostex instructions there is an accent on the mid-lower range that does not help in giving the right weight to the sound, but swells up some frequencies. The fact is that for me that excess of mid lower-range ruins an outcome that may be really good.

The upper range is very present anyway but I think that the audiophile that chooses loudspeakers like these do not want to listen only to Mahler o Bruckner, or AC/DC or Judas Priests, but to a more controlled kind of music. Nevertheless the composers/artists listed above can be listened to but part of the frequency content in their sound will get lost. The upper range of these loudspeakers is very present and is very transparent therefore it does not annoy.

Let’s go back to the positioning. I started following the producer’s instructions and I have already related what I found out. I have tried then with small movements so to obtain the best results without using the acute range correction setting. With the typical position for the old BBC LS5/12, that is to say 1,20/1,50 between them without toeing towards the listening point and 1 meter far from the back wall, it was not bad even if the lower range was in a backward position. I have tried also with the typical position used for the old BBC LS3/5a and for the Sonus Faber Minima that is to say pointed towards the listening point. Also in this case I have obtained a good result but with a sound that was still too soft. Despite the positioning these loudspeaker have a great ability to create a very good soundstage in every occasion since they have a good tonal balance. Still it was necessary to find a positioning that could enhance the mid-lower range and the lower range without making them too excessive. I have kept turning the loudspeakers until the emission points crossed as far as possible from the listening point. I have reached almost perfection when the loudspeakers were at a distance of 3 meters from each other, 30 cm from the side walls -that are packed with Cds and LPs - and one exactly in front of the other and I was standing three meters away from the loudspeakers in what was an equilateral triangle. I say that I have obtained like this the best result in my listening room because when I played a recording of organ music (Bach, various concerts played by Edoardo Bellotti on Foné) I have smiled with complacency even if the lower range was absent. In fact the organ pipes were distributed in front of me and were independent from the actual loudspeakers. The well opened acute range that I have described before was showing here all its power. The timbre of the organ pipes was very natural and was helped also by the excellent recording and so, after a while the lack of the deep low range was unimportant, also because these Fostex know how to play loud and stand the power.

I often repeat the titles of the recordings I listen to because they are my reference. Well, I have listened once again to the Haendel’s Messiah, Hogwood/Oiseau Lyre, this time too the voices were reproduced very well. The lightness of Emma Kirkby’s voice, that is so characteristics in her live performances that I have attended so many times, is well kept here just like the treble voices. Voices that I used to hear when I was co-director in a polyphonic choir. With Haendel’s Messiah I have tested the tweeters and their control range. Their intervention is very determined and I do not think it is set very high in frequency because when I have lowered of about 2dB each loudspeaker, the treble voices have backed up audibly and to enjoy the right balance I had to take the level back to flat.
The same thing happened with the Concert no 17 for Piano and Orchestra by Mozart (Geza Anda, DGG) where with the piano, and especially the right hand, the sound of the GX100 was really close to that of a live piano concert, and once again here the lack of a deep lower range has not changed too much the reproduction. Also here the instruments had an independent positioning from the loudspeakers.

The GX100 are not complete and do not express themselves at best with those music genres that have instruments that play in the bottom range and need power exactly in those deep lower ranges. In the Miserere by Arvo Part (ECM) and also in Fratres (ECM) the organ pedal and the percussions weight are absent.

With Jazz music the result is not bad, The double bass does not go as deep as it goes in a live performance but the result is enjoyable.

These loudspeakers have a very low efficiency so a good amplification is needed and not only to make noise but also for a normal home listening.
I like to think that those that will buy these loudspeakers will build the system around them because they have personality and an attitude, and it would be a pity to tame them with a system that is not really fit for them.

But this is a long story and this is not the right place to discuss about it.

By keeping in mind that a small system is not a horn system or a full range system, if your choice is oriented on something like this, I suggest with all my heart to listen to these GX100. There are many other products that are of the same size and price (and even less expensive) but at a direct listening you’ll realize that these GX100 are more and at a higher level.