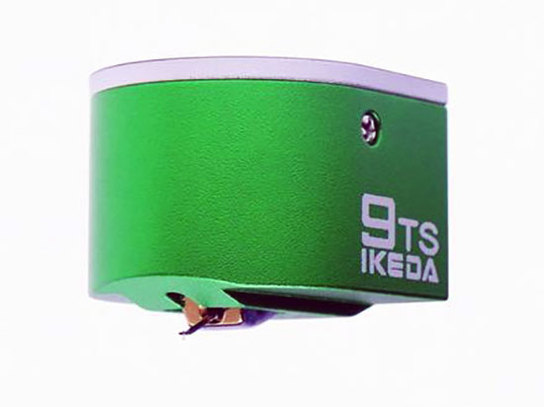 Well, dear readers, we are back to the crime scene! We are gladly going to speak once again of an Ikeda cartridge, and this time it is a world premiere.
As you can see is in the pictures it is the item with serial number 001.
But let's go with order and follow the usual layout of the reviews.
We do not deem necessary to tell you about the Japanese manufacturer, since we have done it few weeks ago. We remind you the link to the page of the Ikeda 9TT.

Let us say that the satisfaction to listen to these evergreen cartridges, of any quality level, is always great.


Our job is to talk to you about all the gear types but, given a choice, we prefer a cartridge rather than a digital player, for example.
Despite the differences among cartridges seem to be small, every manufacturer gives to it its products a clear sound signature.
The shape of the stylus, the materials used for the cantilever or for the body of the cartridge, windings made with copper more or less pure, geometries of the design, lead to differences immediately recognizable among the various brands, and not infrequent, between different samples of the same manufacturer.

There was therefore the curiosity to understand what Ikeda had done with a model which costs about the half of the 9TT that we have successfully tested but with some concerns due to the high specialization of that model. 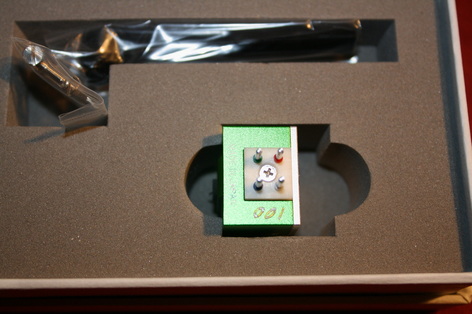 IKEDA 9TS
First of all the colour is different. It is of a beautiful emerald green that gives a touch of vivacity to the whole system in which the predominant colours are usually silver and black ,,, two colours that are a bit boring, so to say.

Then the technical characteristics, very similar to those of the elder sister, exception made for the output voltage that is almost double, and the diamond shape. 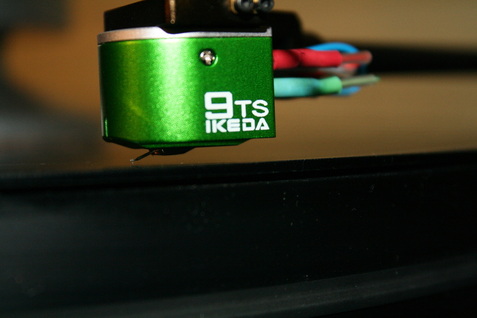 First of all, let me tell you that for this Ikeda we had a special phono preamplifier, the Lamm LP2 that the Italian distributor lent us because he's convinced about the synergy of the two gears.
Briefly, after having listened to the Lamm also with our Lyra Kleos, we can draw up a portrait precise enough of the sonic qualities of the American phono preamplifier. It has NOS valves supplied as standard and it unsheathed a somehow romantic sound with the treble slightly rearward, a dreamlike mid-range that only few devices can produce. Even the basses, although clearly coming from vacuum tubes, were particularly fascinating.
The output impedance is particularly high so I suggest you to connect the Lamm to a preamplifier with an impedance input of 50 KOhm minimum, otherwise the sound coming from your turntable will be spoiled as I have noticed using the CD input of my MBL preamplifier that measures 20 kOhm.
I wondered why the sound was so dull, without dynamic and top range, so I read the characteristics of the Lamm and solved the issue thanks to the other line inputs of the MBL, that are higher at 50 kOhm.

As a result of this appreciated loan, the Ikeda cartridge has been listened to for a long time with the Lamm and with my phono pre amplifier, in order to collect more data as possible and be able to draw on a listening test particularly accurate.
The system must be very warm (the Lamm needs at least half an hour of warm up while the Einstein, that is a solid state device, doesn't even have the switch to turn it off) we start to listen to Charles Mingus' "The Black Saint and The Sinner Lady" (Impulse!).
The double bass doesn't sound perfectly controlled but it is very pleasant and the mid range of the Lamm is powered by the very good signal of the 9TS. The valve signature is precise and has sharp and velvety acute sounds.

Thanks to the slight roll off in the high range, all the hissing due to the sliding of the stylus in the groove disappear and the same applies to many noises due to dust or imperfections in the vinyl. This cartridge tracks without any difficulty also songs with complex instrumental plots. I want to remind you that the band that plays in this recording is composed by 11 elements, 7 of whom play wind instruments. When they play all together the complexity of the signal is significant.

The atmosphere that springs from the couple Ikeda+Lamm is that of a smoky jazz bar of the 60’s. Very soon you stop wondering whether there are any defects or characterizations in the sound; the target is skillfully centered and we are there, right in front of the band.

Changing the phono stage to a solid state, the sound opens up with decision, we appreciate more few details in the medium-high range but ,,, the previous atmosphere disappears as a soap bubble that bursts. More reality to the detriment of dream.
But we are not here to tell which is the right solution. As for me, I'd keep both power preamplifiers and I'd use them according to the mood of the moment. The Lamm caresses the music by interpreting it, the Einstein is a precision instrument.
I am sure that you understand the similarity, I do not want to belittle any of the two gears. Gears that are more or less in the same price range, accidentally.

Remembering what I wrote in the review of the Ikeda 9TT, I want to test also this cartridge with Deep Purple's "Made in Japan" and … "Holy cow!" … This 9TS seems to have been designed by Ritchie Blackmore in person!
You may say: "Easy! Japanese concert and Japanese cartridge ..." but it is not so! Also the 9TT is made in Japan but it does not sound with this vinyl in the same way.
Well, for the moment I do not care, I enjoy the double LP and I stop scribbling on my notebook.

Jon and Vangelis' "The Friends of Mr.Cairo" (Polydor) is a great record, in my opinion. The falsetto voice of Jon Anderson is, this time, in good evidence and the wide extension of the electronic music of the incredible Vangelis is excellently revived.
I want to point out that also in this vinyl produced by the Greek musician you can read on the cover: "Produced, arranged and performed by Vangelis". Yes, once again he is playing all the instruments.
Incidentally, this Ikeda is very fast in warming up and plays very soon at its best but give her at least ten minutes anyway please! When cold, it tends to focus a bit in the mid range.
This reminds me what happened with the Lyra Helikon. The Lyra, when cold, lacked also in the low range and needed at least 20 minutes of warm up.

We change music genre and we switch to Claudio Monteverdi "Battle of Tancredi and Clorinda", "Madrigali Guerrieri e Amorosi" (Cycnus), recorded in the Cathedral of Lugano (CH) in the distant 1961 by Chamber Music Society directed by Edwin Loehrer.
The naturalness of the treble voices is palpable and the instruments have the right weight, while accompanying the reciting voices. They never veil the voices, as it is in the live performances.
Dynamics is balanced and the cartridge does not hide even the smallest details of the ambiance. It brings out also the breath of the orchestra that gives to the record a touch of reality.
I am mesmerized and I am interrupted only by the noise of the cartridge that has reached the last groove.

The difficult choires of the "Miserere" by Arvo Part (ECM) are played easily and also the deep low of the pedal organ does not hider the green cartridge.

The dreamlike atmosphere of 'Rubycon" by the Tangerine Dream (Virgin Records) are played softly or strongly depending on the composition's requirements. The mid range is a bit in evidence in detriment of the top range and this may be very interesting with some configurations or recordings. The Ikeda trademark had to come out some way or another.
The sensibility to the grooves imperfections is very low all to the advantage of the silence and microdynamics. The low range seems to go down without limits and constraints.
On one hand it is less restrained than the Lyra Kleos (that costs 1.000 euros more) and on the other hand it seems more complete. We are talking about nuances, details that we have to search to write something, otherwise we should only write that the cartridge plays well and that's it!
The soundstage has the right dimensions and the sensation of being at the live event is very strong.

In conclusion, the comparison with her elder sibling is natural. Normally, the more expensive the item the better it is. In this case I want to make a distinction.
If you read the test of the 9TT you will see that we at Audio-activity.com have not been able to define it precisely "universal".
It did some things in an extraordinary way, other things not so well, so it was not recommended for all the musical genres.
This 9TS instead is not as perfect in the mid range but it is very good with any vinyl and musical genre it plays. 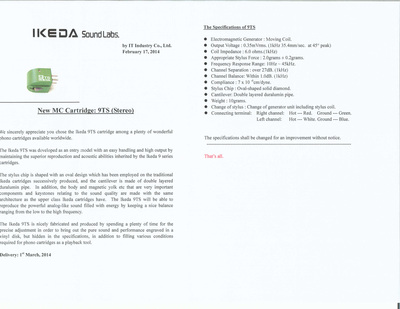 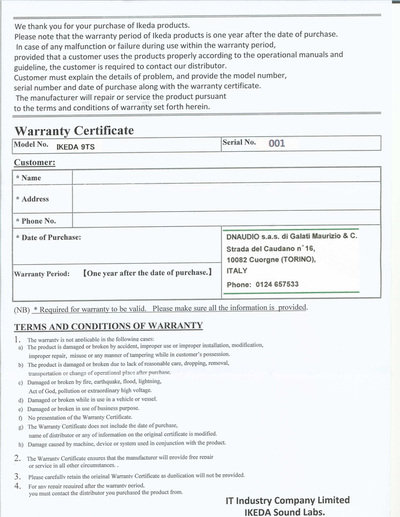 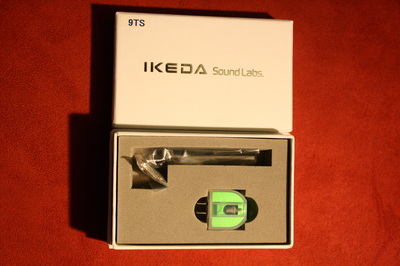 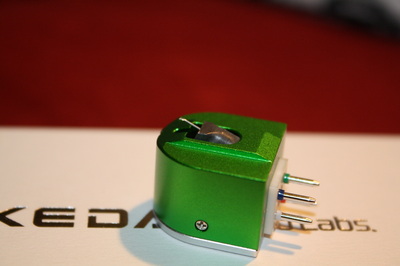 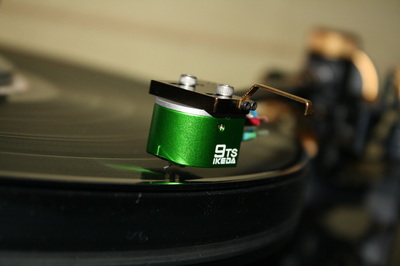 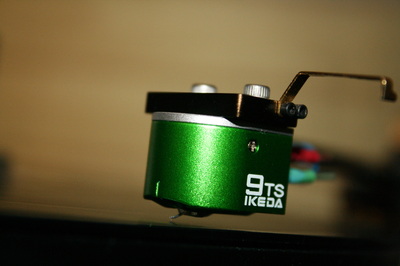