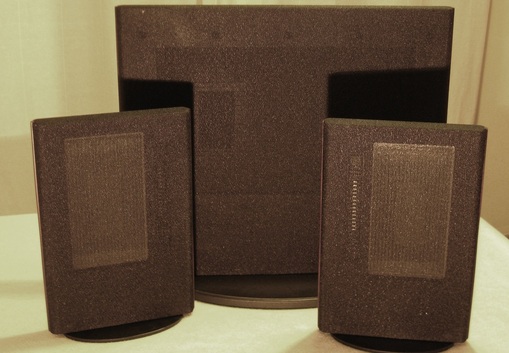 It has been a successful brand for over 40 years and this means that they are very competent considering also that all the users love them.

The “shields” of this U.S. firm are present in many, many houses around the world, a clear sign of their good performances that have rewarded the efforts of Mr Whiney and Co.

The modernization and renewal of its products it’s a feature of Magnepan; and once done it, the product remains on the market for a long time. Therefore, whenever Magnepan decides to launch a new device you can be sure that it is more than good.

I must admit that as audiophile I often boast that I have been one of the first buyers of Magneplanar in Italy. In 1974 or 1975, I had in my house the MG II because the Tympani were too big for the apartment I had back then.

I still remember the first impression I had: a very wide soundstage, a soft but precise timbre … and also the low range was perfect for me. Maybe it was all a matter of the room size and distance from the walls, I do not know but the result in my room was excellent. 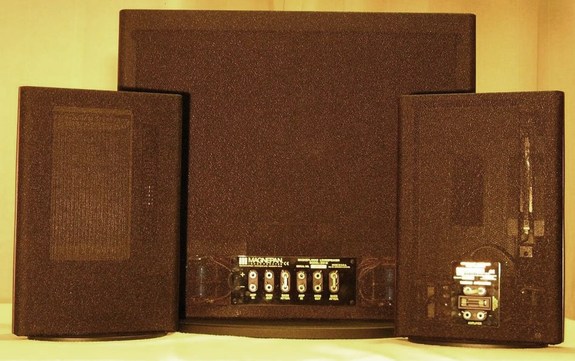 This happened long ago but Magneplanar is still successful and these Mini Maggies, born to be desk loudspeakers, confirm it. This system can be used with great results also in small environments. However, as for my experience, I can tell you that also in rooms that are quite big they sound good; my room is not small and is quite deaden, but these Maggies filled it with music with the amplifier working at full power.

The system is composed of three pieces; the two satellites can be put on a desk or on a stand if they are used as satellite + subwoofer and one panel for the low range, called DMW. The cutting frequency is 200 Hz. Declared efficiency is 86 dB/2,83V/500 Hz, but in a close space it seems lower and the frequency response is declared at 40 Hz for the low range and around 40.000 Hz for the upper range. Tweeters and mid are just a part of those mounted on the MG 3.7, therefore the tweeter is a real ribbon, the woofer is taken straight away from the MG 20/7 that is a far bigger speaker.

The connection is very simple and similar to what is required by similar systems. The speaker cables must be connected to the woofer first and then, with other cables, the signal is taken from the woofer to the two satellites. It’s all very easy. The binding posts with a security screw make the connection very safe because even if you involuntarily hit it or move it the two cables that go to the amplifier will not touch and short circuit.

Well, this system is not a toy and as Magneplanar underlines on its website (www.magnepan.com) it’s not a system for PC but a real dipole system to listen to music also when you are sitting at your desk. 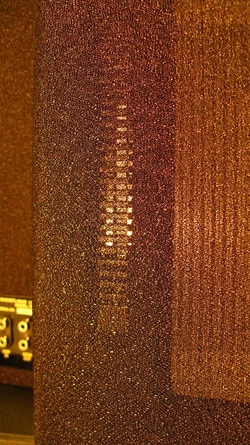 
The positioning. If you use the system on a desk that is very close to the wall, you may obtain a low range that is more powerful than it is necessary. If this is the case, follow Magneplanar’s instructions and use the suggested resistors to control the signal in the room.

If your desk is one or two meters from the wall it is perfect because the low range is correct and gives you a sensation of a wide space right in front of you. If you have a small room and you use the Mini Maggie System - MMS from here on - they had better be positioned at least 50 cm from the back wall. You’ll have to move the woofer onward or backward until the mid-low range and the low range do not overlap each other. If you have a medium size room, one and a half meter is the right distance. If you keep the satellites distant from one another and if the woofer is at the same distance from the back wall, the system will play well and also quite loud (the woofer seemed to me very solid and seems to handle big quantities of Watts without any problem).

One thing is certain, don’t use a small power amplifier with just a few watts of power, to drive them. This MMS is a Magneplanar, a brand that does not have very efficient systems; therefore, there is the need of a good amount of good Watts on the 4-Ohm impedance of the loudspeakers we are reviewing.

Luckily, the system I am reviewing arrived in my house already burned in. All those that know Magneplanar have clear in mind that their burn in is quite long and that the characteristics vary a lot and you have a prevalence in turn of the mid range, of the mid low range, of the mid high range and so on until all the membrane do stabilize and the system starts to play as it should.

As for the soundstage, it is not as high as it is in the other products of the brand; is wide but not as it was with my MG 1.6. The presence of the ribbon tweeters is clear, the sound is grainless and smooth as it is with the bigger Maggies.

At first I had a hard time with the system used as “main system” (that is to say as a normal loudspeakers system and not as a desk system). The low range was absent; it was monotonous, short, puffing. Then I remembered that with my MG 1.6 I had better results positioning them far from the back wall. In fact when I positioned both the satellites and and the woofer at 160 cm from the back wall the low range resulted very correct - I chose for this test a Fonè CD with music by Vivaldi rewritten for organ by Bach -.

The satellites were positioned far from one another and not pointed towards the listener. The organ seemed to be back in the distance, clear in its timbre and with a powerful pedal, without any range in evidence. While listening I gradually turned up the volume until quite high. The MMS had no straits and kept the pace.

The sound is the typical "Magneplanar sound" that does not have the right punch for the hardest genres - the extension is present though - and we must remember that the soundstage is well recreated, that the timbre is clean and real - the ribbons are never too aggressive or above the lines - and also as for the dynamics the system is correct and can play quite loud.

The instruments preferred by the Maggies, the piano for an instance, are reproduced very well also by the MMS; listening to Mozart performed by Pogorelich (CD DDG) is a real pleasure. The sounds come from the silence and in the silence spread; all the details are present, well integrated in the sound; the last two octaves are reproduced with the right timbre, while the first two are a bit rearward. The instrument is credible anyway and it is put in a rightly sized sound box.

All the winds in the CD Delos of The American Brass Quintet are well reproduced, is excellent also the reproduction of the Brandenburg Concertos by J.S. Bach on RCA Seon directed by Leonhardt. The woods are never annoying and are pleasantly real.

I do not know if it’s worth speaking about the human voice that is the ace in the hole of the U.S. Systems. One thing is certain: the voices of Jesse Norman, Anne-Sophie von Otter, Pavarotti, Aretha Franklin, Frank Sinatra and Justin Timberlake were reproduced in an excellent way. The MMS did a good job also with the choirs in the Mottetti by J.S Bach (Suzuki-BIS or Harnoncourt-Telefunken) or the Passio Secundo Johannes By Arvo Part (ECM).

Listening to “Ich will bei meinem Jesu wachen” from St. Mattew Passion by Bach ( Herreweghe, Harmonia Mundi, year 2000), the listener is struck by the many details of the singing and also by the timbre of the tenor, the minimum variations of the dynamic, and the clearness of the lyrics sang.

There were moments of difficulty with the records that put in a tight spot all the small systems; Arvo Part’s Miserere for example or the Départ by Wolfgang Rihm or again the Fanfare of the Common Man by Aaron Copland. The soundstage is well reproduced but there is a certain struggle in the lowest range that shows that the loudspeakers have reached their limit; all this at a high volume, of course.

No problems with jazz music. The double bass was well reproduced, lighter than that of the MG 1.6 but in line with what you think you can obtain with a DMW woofer and with difficult recordings such as the A Night in Tunisia by Art Blakey, a direct-to-disc Philips vinyl. The cymbals that are often times annoying are here clear, opened and never cutting.

It was only with hard rock that the low range of the Maggies made me regret somehow the AN E Spx that are more expensive and bigger. (If we refer to the desk system there is a good punch, it’s not the same of a traditional woofer but it doesn't lack punch).

The system all in all is transparent. Transparent for me means that it lets the recordings speak, in fact the difference among recordings is evident and this in a wide variety of frequencies.

The observations here expressed consider also the cost of the system, because it’s sure that the MG 3.7 has an overall better performance but that’s normal! Otherwise all the benchmarks would be lost and also the respect for money gone. For a big room, the MG 12 or the MG 1.7 is preferable, but they do not have the extreme refinement of the mid range of this MMS. Well, if Magneplanar would supply this system with two woofer panels, one could have a small but complete system to listen to all music genres.

This system is one of a kind, there are other systems with woofer or sub woofer and satellites but not with a magneto planar dipole; therefore if you are interested to a system like this there are not many alternatives.

One last thing, talking about a rearward low range I was referring to the system used as a home system and not as a desk system. In this last case, with the satellites on your desk and the woofer near your feet the low range is more than enough.

So … Magnepan started with home systems … now we have desk systems … what about car systems? I have a small space in my dashboard and I am curiously awaiting for it. 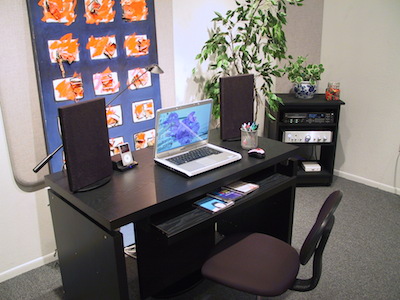 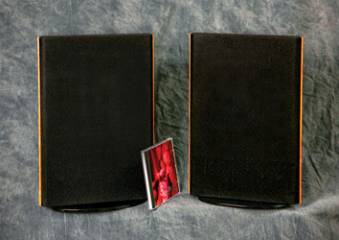