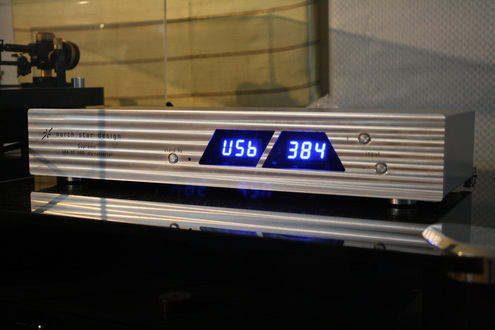 When North Star was just a start up in the 90’s and designed and produced its first converter- the Model 3 - we were already keeping an eye on it.
Since then, Giuseppe Rampino, owner and designer of the North Star electronics, has never stopped producing and developing electronics, including amplifiers, integrated CD players and pre amplifiers. But it is in the digital technologies that North Star excels, offering projects with the best cutting edge technologies available on the market.

Giuseppe Rampino is a very nice person, someone you can talk to. He is one of a kind and in a world where everyone asserts to be the best and way upon the competition he is really different. When he answers to your questions he does it almost whispering, staring at the inside of the component as if it could speak by itself without the help of his “dad”. He’ll tell you about the applied technologies, the discrete output stage (in the case of Supremo), or about the SMD technology of the boards, about the input … He is an engineer, therefore he will not speak about the sound but he will let you judge it.and he won’t tell you neither about the price/quality ratio of his devices because he’s certain that you’ll notice it by yourself.

In the US you often find the tag “Proudly made in the USA” and I’d appreciate the same tag - but proudly made in Italy of course - on the box and the back of this component. In fact, once opened the top, you realize the perfect engineering of it and also the utmost industrialized creation in contrast with many other devices I have seen that seem built in a cellar - and may be they really are!

This Supremo seems to be the missing link between mass consumer electronics and handcrafted electronics created by a very advanced craftsman and with all the latest technologies. A product designed to be very competitive in a very demanding market.
Supremo is the newest device. It is a top range product as its name suggests and we will review it for you.

Let’s see its characteristics, this is what you find in the leaflet of the North Star:
The analogue section employs discrete components with very low noise matched transistors.
The DAC is an ESS Sabre flagship ES9018 in double balanced configuration.
The asynchronous USB Hi-Speed port has a separated low noise power supply and two separated toroidal transformers are employed for analogue and digital sections.
The Supremo can decode native DSD 2.8 – 5.6 Mbit/s and 384 kHz – 32 bits on USB.

We've just discovered that now it accepts signals up to DSD x256, with Windows OS, just changing a chip. Obviously, the new devices are already equipped with this upgrade.

This device has the typical North Star look: a glazed aluminium front panel with a common look and the two asymmetrical displays that show the selected input and the frequency of the sample rate. On the front panel there is also the switch on button (with a red LED light that turns on for stand by) and two buttons that select the input desired and allow the choice of the available options. The back panel has two coaxial inputs, two optical inputs, a balanced AES/EBU input, one USB, one I2S that accepts also DSD signals, the balanced and unbalanced analogue outputs, the AC cable and the switch on button.
There are different options available among which the possibility to choose between two PCM filters, DSD filters, the signal phase (0-180°) and the width of the PLL band to lock the signal.

A CD with the drivers comes with the DAC to install it on Windows, while for MAC there is no need to install it.
The user’s manual is really good and explains very clearly what you have to do to get the audio from your computer and from the different audio player softwares you can have in your PC. This is just perfect for all those that, like me, get lost among all the acronyms and usually give up before accomplishing the task.

I know I should but I do not want to learn how Foobar or JRiver work, I am not able to create layouts, windows, CD covers and so on …
I take a song from my PC, press play and that’s it! As for the rest I rely on LPs, CDs, SACDs. At the moment I use computer audio only for DAC reviews and if I have a doubt on how to configure something I ask the DAC designer and I follow his instructions. I do not want to be among those that spend days and nights fuddling with computers, boards, HD, operative systems and so on.
I need my system to listen to music and not to train as an IT technician and when I have spare time I love to go out with friends or with my partner, ride my motorbike and drive going wherever I feel like. 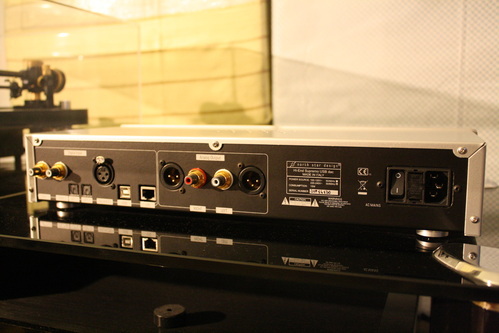 Time to start with my listenings. The first is one of my references: “The Ghosts of Tom Joad” on CD. The low range is very good, clean and sharp. The voice, if compared with my reference is a bit rearward and the sound stage less large, but just a bit. In this review I will often make reference to the dCS Puccini, that is regularly in my system. This North Star Supremo is often one step below but the difference is not so big as the price difference could suggest. To buy one dCS Puccini + U-Clock you need 7 - I say seven! - Supremos.

Ok, back to my listenings. The “Vespers for the Blessed Virgin” by Claudio Monteverdi directed by Gardiner (Archiv) is next. The complex choirs are well defined but are not perfect while the single voices and the balance among instruments is great. The echoes of St. Mark’s Church in Venice are perfect and we find ourselves in the original place. Emotion takes over. In the “Duo Seraphim” the reproduction of the voices is very similar to that of the Puccini. The only difference is that I hear the singers a bit closer than usual and the lute in the background seems to be only a bit softer.
“Siria” is the CD by Antonio Placer (Harmonia Mundi). I hear a guitar perfectly reproduced, mellow as a nylon string instrument should be. There is nothing to say on the voices too.

In the final outcome we can evidence only a slight sense of vagueness. May be this result depends on a higher jitter than that of the Puccini - that is provided with an external clock - but I am not sure about it. Maybe the effect of the U-Clock - that costs alone twice as much as the Supremo - is not up to DACs designed and produced with small budgets. 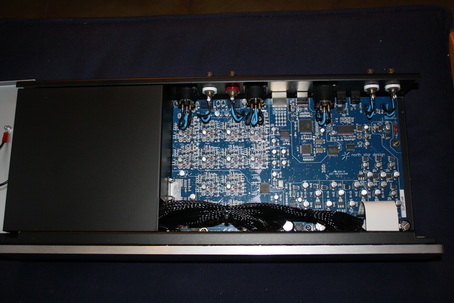 With every DAC, the difference with files 24/96 and 24/352 (DXD) is very clear and this Supremo too highlights the difference. The second type of files are more defined and there is more air among instruments. While listening you feel relaxed as if your brain had to do less work to rebuild the original sound. Or maybe this is due to the better quality of sound that comes out of the DAC, helping the output stage to do a better job?

The Allegro of the Violin Concert in D Major by Mozart (2L) is extremely natural, without artificial digital artefacts. I must say that I notice very clearly a big improvement on the music side, all this only few years after the last review I made of a North Star. The reproduction has always been very accurate but some time ago I noticed that there was a lack of that certain flair that is necessary to satisfy the most demanding audiophile. Well now we have that flair and Mr. Rampino has designed a DAC that is up to all other devices even those that are “richer and more famous”.

We stick to high definition files of 2L and we can easily hear the difference between 352 kHz and 96 kHz in the song “Colorazione”. The percussions that characterize this song seem to approach and to reduce the space among them, also dynamics seems to loose something. It is probably a sensation due to the lack of air among instruments and given by a lesser liveliness.

I listen to “You Look Good to Me” performed by the Oscar Peterson Trio (24/352). It starts with a piano and a double bass that is played with a bow. The illusion of being present at the concert is very strong. Later on, when the drum plays along with the other instruments, we listen to a sound that we’d love to keep on listening forever.
The cymbals of the drum are not perfect but it’s the fault of the recording and not of the DAC.

Warning: if you are looking for a DAC/equalizer you’ll have to look for something else.

Only while listening to very complex songs such as “Ave Stella Maris”from the Vesper for the Blessed Virgin” by Monteverdi (Gardiner - Archiv) I notice, when comparing it to the dCS, a small harshness in the choirs. But please keep in mind that we are comparing two devices that belong to very different price ranges.
The frequency response is well extended and the signal remains very neutral but with a high resolution, a characteristic that all music devices should have. Easy to say but not to implement!

All in all, very few brands obtain these results and when they do, the price is very, very high.

This North Star Supremo, for 3.000,00 euros is a real deal if compared to other DACs with the same performances.- It is updated with the most advanced technologies and is produced by a firm that is solid and well known all over the world. Distribution and assistance are present everywhere.

If I consider all these things and with these very satisfying listenings still in mind, I can only suggest you to buy it. 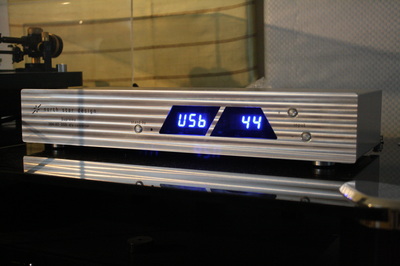 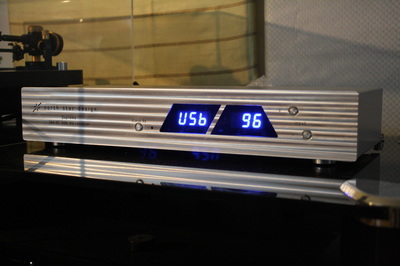 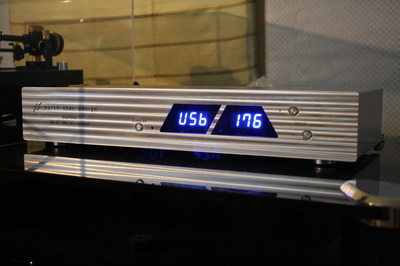 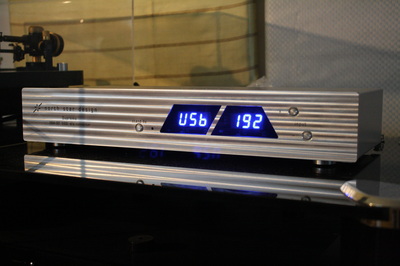 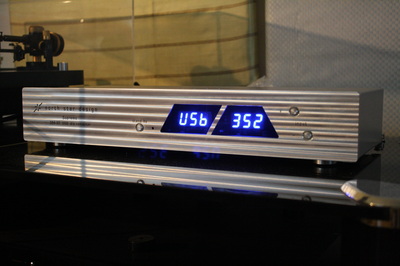 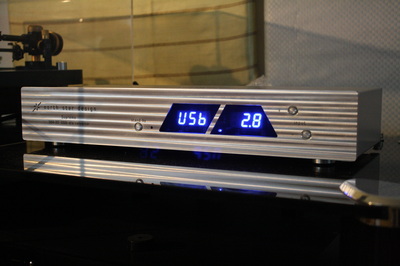 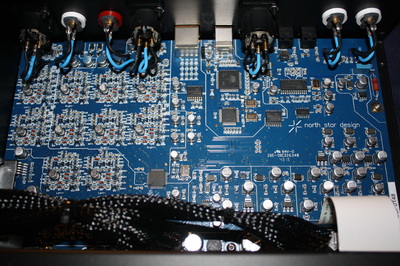