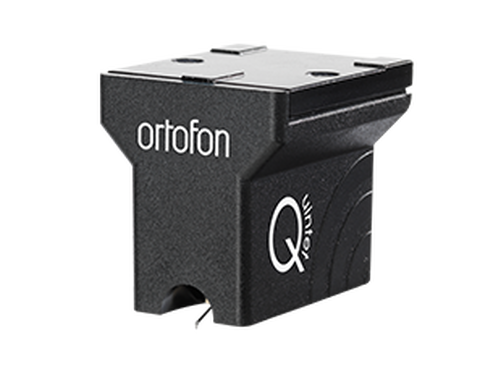 Does the Ortofon brand need an introduction? It seems rather pointless, given that music lovers are well aware of the long-live Danish brand and, above all, many, many, were able to install an Ortofon product on the tonearm of their turntables. Then there are those who, like me, had owned more than one or two, but the fact remains that, telling the history of Ortofon is arduous, long and probably, useless.

Among the various Series of cartridges produced by Ortofon, we deal today with the medium-low Series (below it, just the Vivo Series): the Quintet; and – let me tell you in advance – it's a medium-low level priced product, but it's performance is higher than the price reveals; and this leads to ask some questions. One above all: can you listen with high-end quality without spending too much money? With the Ortofon Black, the answer is: certainly yes.

The Quintet Series is available in five versions wich use the color code that distinguishes the Ortofon products range since a long time; Red for the lowest level, Blue for the medium-low level, Bronze for the medium-high level and Black for the high level; The fifth model is white colour and is the "Mono" (it's called "Mono" and not "White"). In the Black category we can also find an MM cartridge that makes me wonder whether it is really necessary to buy an MC (I’m talking about the excellent 2M Black, of course). It seems that the word “Black” is used to state the excellence, excellence that in this case seems confirmed without fear of prove wrong (and my readers know that I'm not just assertive, but here I claim that we are at a surprisingly high level ... very high). 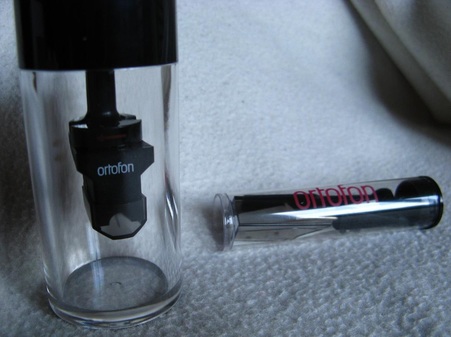 I have been curious to try one of these Quintet for a long time; sure, I would have preferred the Black, as is logical, but I would have settled for another, lower level model, just to see if that feeling I had with the Cadenza Blue was confirmed. I have often stated that Ortofon for some time had somehow lost his main timbral character, and I was referring in particular to the Kontrapunkt Series which, although excellent, I think didn't have those qualities of clarity and linearity that were proper to the Ortofons I owned (and here I refer to my previous reviews, both on these pages and on "Hi-Fi Music" blog, to figure out how many I've owned); but with the Cadenza Blue it seemed to me that the sound had returned "to the right path."

The distributor delayed the delivery of the cartridge but one day I was in Brescia setting up an Ortofon Quintet Blue at my friend Alberto's home, and shortly after the installation I pulled the old Ortofon test disc, the one that they gave with the old MC 30 first Series. On the A side the groove contains the signals necessary for a proper matching of the tonearm and cartridge and side B contains music for orchestra/band performed by the Orchestra of the Tivoli Park in Copenhagen; the first groove was amazing. Clear, dynamic, and natural sound, even violent, accompanied by a safe tracking (and who knows this record, a direct-to-disc recording, knows that it is not exactly an ordinary vinyl, but is a top quality, difficult recording).

In a nutshell, after a while I received this Black to review, thanks to our friends Roberto and Stefano of Sound Machine shop in Milan, who have gave up on the Black cartridge for some time and instead of showing it in their shop and sell it, they loaned it to Audio-activity.com.

By the way, the usual compliments for the packaging which includes two pairs of screws of different lengths, the screwdriver, the scale and the stylus cleaning brush, but especially compliments to Ortofon that has designed a squared cartridge body, with nut-less holes; what does it mean? That in five minutes the cartridge is installed and set. 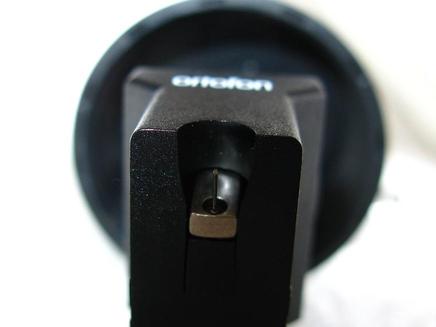 The alignment is recommended using the cantilever as a reference point, but in this case the cantilever was perfectly straight in his place and thus the aligment using the cartridge body was almost perfect (the fine tuning was made by ear). It's a good thing to make some fine adjustments of the VTA; the Shibata stylus of the Black seemed quite demanding and sensitive to the SRA, so that eventually the pivot of the Mørch DP 6 had been lowered a bit. The timbre got more natural, without tracking troubles.

The stylus, a Shibata shape, as said, is assembled on a boron cantilever and this characterizes the Black from the other Quintets that have more "simple" shapes and aluminium cantilevers. Just to complete the technical data, the output voltage is 0.3 mV (but seems a conservative value; I have not found striking differences with the Lyra Kleos with a 0.6 mV output); the internal impedance is 5 Ohms and the recommended tracking force goes from 2 to 2.5 grams with the optimal weight at 2.3 gr. Ortofon (but it is also our experience) states that when the internal cartridge impedance is low, the sound is usually less influenced by the load set in the phono preamplifier; In fact, there were no notable differences between 100 and 500 Ohms, and then the ultimate value chosen was 100 Ohms (which is the preset value of many MC phono preamplifiers). The magnets are made of neodymium.

The setup in which the Quintet Black was connected is the following: turntable Bauer Audio DPS2, tonearm Mørch DP 6, in this case with the Precision Red armtube that seemed the most advisable for this cartridge (someone will tell you to use greater mass armtubes; try them, but then do not complain if the cartridge damper will deteriorate quickly and you have to spend a lot of money to retip it); phono-pre American Hybrid Technology -P; Lavardin C62 preamplifier; amplifier Bryston 2B-LP; speaker system Davis Acoustics Monitor 1 (the previous main speakers, the AN E-Spx have gone); and the usual cables. 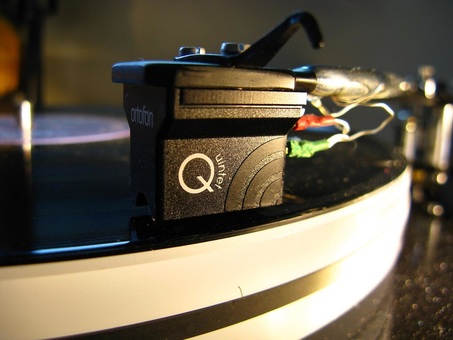 “Amazing” ... this was the first word that came to my mind when I started listening to “Ode for the Birth of Queen Anne” - Handel (Hogwood, Oiseau Lyre) and I heard a large, well defined soundstage and with the correct timbres; perhaps a trace of forwarded medium-low frequencies; but just while the cartridge was new, because some days after that sign has gone. Beautiful solo voices, wonderful young sopranos voices, great trumpet and strings; in short, an impressive sound. After some days of use, that impression was confirmed.

The listening of "Louis Armstrong & Duke Ellington, Recording Together For The First Time" - the famous 45 rpm Classic Records laquers - is fantastic; Armstrong’s voice is thrilling; everything that happens on the stage sounds correct, with a tonic but right bottom end.

Again about the Classic Records’ laquers, the beautiful "Witches Brew" with a good, believable orchestra sound, and dynamics absolutely not bad.

I know it is not "nice" to make comparisons with other products, but I’ll make them anyway. Denon DL 304: the comparison is not awkward, but it is evident how, even with a no-striking cost difference, the Ortofon sounds more relaxed, free, dynamic, open at the top, natural. Tracking ability seems to be at the same level, even if sometimes the Denon seems to hesitate in tracking the more complex signals (eg, in Gaspard de la Nuit by Ravel performed by Pogorelic (DGG), towards the end of the groove, where "Scarbo" Pogorelic hits the keys with both hands), small losses of contact, that with the Ortofon are absent. With the Denon some slight effect of confusion with complex signals emerges (as in the Sacre du Printemps of Stravinsky conducted by Maazel on Telarc), while the Ortofon runs smooth and quiet. But I must say that I can’t find huge differences even with the Transfiguration Aria, which costs much more then the Black; perhaps a better definition of the medium-high range, but I’m speaking about nuances and maybe lacking a bit of that feeling of "live" sound that the Quintet Black gives.

Just to nit-pick, in my system I heard only a slight, almost imperceptible lack of the highest part of the frequency range, but it is a very small flaw in a good overall result.
In short, Ortofon hits the bull’s eye.
The price is fair and it has a great price/quality ratio.

Besides, who wants can buy the Anna or the A95, but in the meantime, for those who haven’t a lot of money to spend on audio, music enjoyment will certainly reached with this Black.

Soon it will be my birthday ... so I know that my gift will be a Black Quintet! 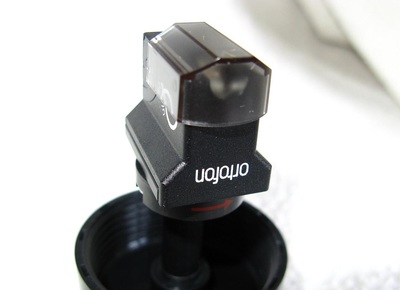 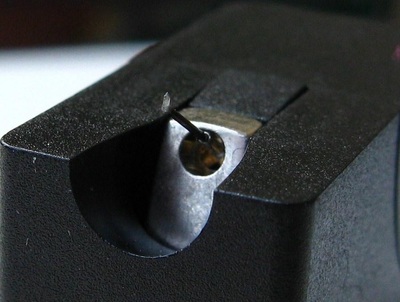 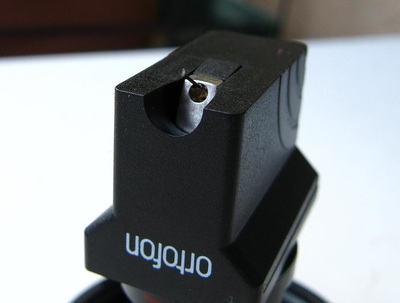