2014 is definitely the year of high resolution because of the continuous increase of converters and digital players, and also because there is an increase in the production of vinyls, both new releases and reprints of old recordings.

Bits and kHz are countless nowadays. The fact that the original files were not sampled at these frequencies is something no one seems to care about. 384 kHz, DSDx1024 ... this latter is a format that can be obtained only upsampling lower resolution samplings. Many people are convinced that this a good way to get excellent music files. But if something is not present in the original file, how can you possibly have at the higher frequency sampling. The objection is old: “CD players that do the oversampling of Red Books make them play better”. For one second we will forget about “zero oversampling” supporters - that many times seem to be right - and let’s say that in this case there is a rational explanation: we move to an ultrasonic band the digital filtering and the phase shiftings are moved to non audible frequencies. But this explanation cannot be applied to to frequencies that are far beyond 100 kHz, of course.

We can cope with everything, after all it’s OK if people buy 300 km/h cars and then have a speed limit on the highway of 130 km/h. May be one day they’ll test their cars on a real racing circuit with no spread limits.

Audio-Activity is going to review today one of the world’s greatest performers in the digital field. The designer and owner of Playback Designs is Andreas Koch. We recently reviewed the MPS-3 player and we told you about him. He also designed for other brands such as Nagra, and OEM boards for other brands that maybe do not like to be quoted here. After all, when you are a designer and your products are the most advanced in the field it is normal for other producers to choose your ideas for their devices. Evaluating boards are easy to find in other audio laboratories and this is the demonstration of how much he is estimated and famous all over the world. 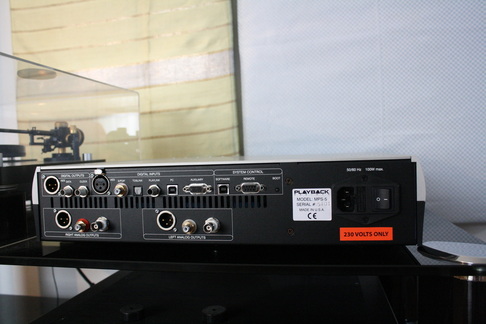 Time to talk about our (wish it really was!) MPS-5. We already gave a hint on a few features in the interview that Andreas Koch kindly granted us and that will be published at the same time of this review, in this page.

In 2008 Playback Designs introduced the MPS-5 to the audience and I was in Las Vegas for a report of the T.H.E Show.
Wandering through the different rooms of the Alexis Park I noticed a system in which there was a source unknown to me. It had a strange design and its name was Playback Designs MPS-5. It played also the SACD, I liked it straight away since I have always been a fan of this high resolution format.
I listened to its sound carefully and went back and forth from that room many times. I do not remember the other components in the system but it’s not important, I liked the source. Its sound stroke me, something that happens very rarely.

I am the first one to assert that it’s impossible to judge a single component in an unknown system, but sometimes there is something different and you notice it. Well, that year I even suggested that component to an Italian distributor. The price was, back then, very interesting because the producer could sell directly in the areas that were not covered by the distributor.
For a while, this brand disappeared from the Italian scene since when DNAUDIO decided to distribute it in Italy. In the meantime Playback Designs product offer became wider, new models were produced both as integrated players or D/A converters.

Well, may be Koch is not very imaginative, or may it’s because this was a lucky name, that fact is that we are still dealing with the MPS-5, just like in 2008. Same original line, same big red display. A part from this, it’s an item that that has been updated to the latest digital technologies also thanks to the USB Extender Box. It is separated from the player and there is a precise reason for it, but we’ll talk about it in a while. I think Andreas Koch is the only manufacturer that updates his product every six months (or less) without changing the name of the device.

This integrated player has in the same chassis a fine Esoteric mechanic and a converter that decodes the most common digital standards. It accepts digital signals up to 24/384 kHz in PCM and 6.1 MHz in DSD. The Playback automatically recognizes the source that sends the signal (PC, Mac, iPod and so on) and uses a proprietary technology to avoid jitter. This technology is called PDFAS (Playback Designs Frequency Arrival System). If the high resolution files are sent via USB the USB-X starts to work. The USB-X is separated from the chassis to which it is connected with a proprietary cable to isolate the asynchronous clock from the analog circuits; it also allows the DAC to recognize through the USB connection the standards we mentioned before. The transport can read both CDs and SACDs. This an added value that the DACs-only do not have, since the PCs do not plays them and so do not extract the DSD signal through an optical reading.
The player has a nice and heavy aluminium remote. It has blue lighted keys that turn on as soon as you touch them … there’s no need to switch on the light to use it, great thing.

A short description: it has the typical Playback look and it is divided into two parts. The upper part is silver coloured and has a small display with red LEDs that show the playing disk format or the sampling frequency of the incoming digital signals. The lower part is black, it has a display twice as big than the other one that shows the number of the song playing and the running time. There is also the thin metallic drawer for the Esoteric transport. The buttons to control it are positioned in the upper part, they are hidden from sight but are easy to use when necessary. The overall result is original and very recognizable.

The back part is more complex. From left to right we have the digital outputs AES/EBU, the balanced analog outputs, the unbalanced and BNC outputs, data and Clock outputs for future upgrades. The digital inputs are AES/EBU, S/PDIF, Toslink, Playlink (proprietary but not ready to be used yet) ,PC ( for the USB connection), Auxiliary for the USB-X.

The remote has all the usual functions but also the possibility to regulate the absolute polarity - or phase - that many audiophiles like.

These are the informations given by the designer:

1) the toroidal transformer is custom made to my own specifications. Special material is used to minimize interference with audio.

2) Vishay resistors are used in all analog audio paths.

3) Each capacitor used in the analog audio path has been specifically selected to optimize overall audio performance. There are many different types of capacitors with different resistive characteristics, but for each application we selected the optimal part, regardless of cost.

4) Normally PCB material is fiber glass and epoxy, but the analog PCB is made of ceramic material which is very expensive and only used for very sensitive signal applications. It minimizes the "skin effect" and stiffens the PCB so that its eigenfrequency is moved out of the audio band. The difference is very audible. 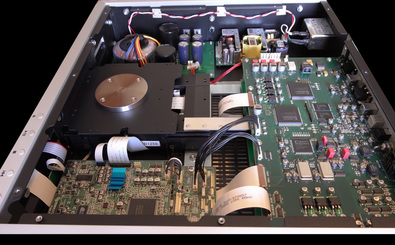 The first CD I listen to is the often mentioned “The Ghosts of Tom Joad” by Bruce Springsteen. I know this record very well since I listened to it many tens of times.
At the end of the first song I hear a strange “noise” coming from the door at my left. I stand up and open the door. No one is there. I listen to that song again and I hear that noise once more. I look towards the door and at the same time realize that it’s in the same music fragment. I listen again, this “noise” is in the song’s arrangement. I had never noticed it before even if I have listened to this song hundred of times. Now that I know it is there, I can hear it also with my dCS but the merit goes to the one that made me discover it and it was the Playback Designs among the many players and converters that I have tested.

I listen to “Elegia” by Paolo Conte (Atlantic) also to have a taste of this artist’s style since I am going the presentation of his new record next week.
Just like I said for Bruce Springsteen’s record I hear noises and sounds I have never heard before. Well it could be that I am influenced by the things that I mentioned above but I know this record very well and I cannot believe that the sound of the cymbals that in the first song sound so real are just imagination.

The beautiful “Cuban Overture” by Gershwin (Orchestre Symphonique De Montreal - Charles Dutoit - Decca) has a jubilation of woodwinds, percussion and woods that the Playback Designs plays with ease producing real sounds and sometimes enthusiasts for the sense of general realism.

The SACD “Sarah Vaughan” (Verve) seems to be different. The voice of the American singer materializes among the loudspeakers, with a richness of nuances that I have never heard before. It’s an old mono record, recorded in 1954 and it’s incredible what people could record in a magnetic tape. The technique of Mrs Vaughan and that of Playback Designs put together give incredible results.

“Good Morning Little School Girl “ by Muddy Waters in DSD file strikes me for the sense of reality it inspires. Listening to music in this way is a once in a lifetime experience that everyone should do.

I test the speed of the MPS-5 in decoding the different resolutions that the PC sends, from the 16/44.1 files to the 24/384 and again the DSD. It plays them immediately without any uncertainty.

The quality of reproduction grows along with the different resolutions, and those that think that this is not true are wrong.

I listen to “Trespass” by the Genesis (SACD EMI) properly. I say it as a fortunate owner of the original vinyl record.
I enjoy this triumph of high fidelity music. Digital residual artifacts disappear and I hear a nice and solid low range - that it's impossible to find in a CD - the medium and high range sound very natural. For a Cd it’s impossible to sound like that, no matter what Andreas Koch and other designers are doing to make the standard Red Book sound better. The SACD could have been a great media for the music. Moreover, the format can not be copied and stealed as they do with PCM. Another lost occasion for the music industry ...
I state again: this MPS-5 is fantastic with CDs but with high resolution it is unequalled. Too bad that not many people can enjoy it.

Few reviewers have tested this device and we are very proud to be one of them.

The price needs no comment and no complaints on how much high fidelity costs. It is expensive but Kochs’ idea to put everything in the same chassis has made possible to have a price 3 or 4 times cheaper than that of the competition with the same sonic qualities.

How many competitors does this MPS-5 have? Maybe 5 or 6 but their reference devices are more expensive and have maybe one or two small characteristics that can make their sound a bit more attractive. Well it’s up to you readers to decide if one or two hues are 20, 30, 40 or 50.000 euros worth.

It would be wonderful to have this device in our reference system, may be one day … 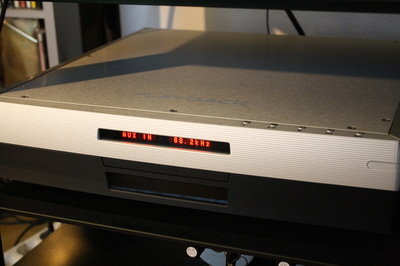 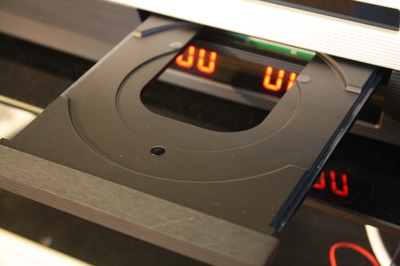 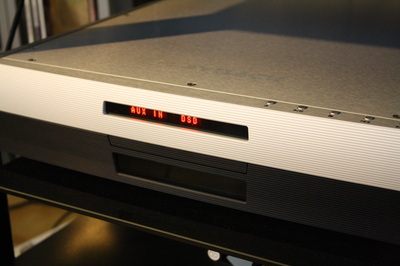 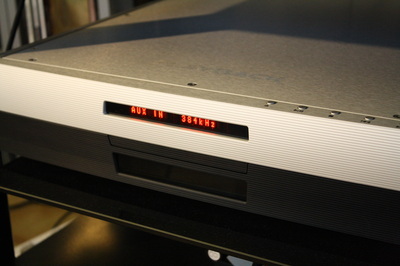 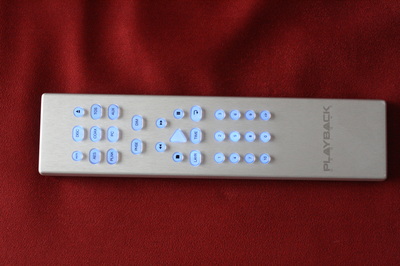 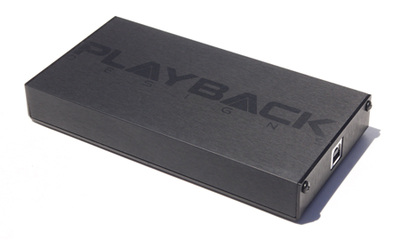 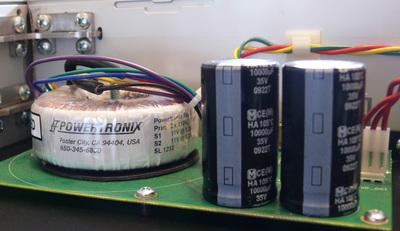 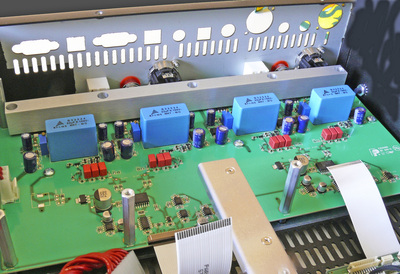 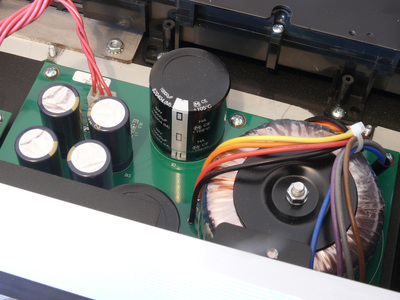