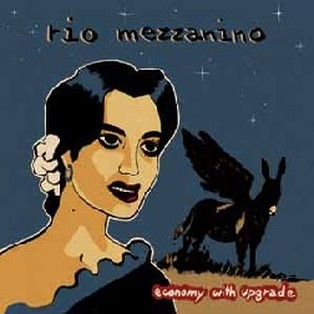 
Music pervades our life. Every single time you choose to listen to it, it's just the right one,  imagining ourselves without music would be like imagining a two-dimension life.

A possibility to understand, listen, appreciate do come from every direction. And just when I was doing something else, my wife points me out the credits to a documentary film she was watching.
The movie is “She Said Yes” -an italian love story shot in Sweden- “listen to the music”, she says. Very interesting indeed, and reading the credits we learn that the soundtrack is by “Rio Mezzanino”... utter dismay ...  who're them, what do they do, where do they live, why ... why did they call themselves like that??? Must be italians!!!!


And that's when the spasmodic search for info does start. Youtube, we listen to some songs we find uploaded to the maleficent “tube” ... they do exist ... yes, they do ... then we google them ... and search for them, they do have a site ... is it even possible I never knew they existed ... they're interesting ... I want them ... I want everything they did ... how many works are out there ... again, who're them ... I need, need to learn something more.
To begin with I start reading some biographical notes, I discover that Rio Mezzanino is a project started in Florence in 1997, a band arranged by italian artists: Antonio Bacchiddu – vocals, Federica Fabbri- guitars & vocals, Leonardo Baggiani – bass & vocals, Oretta Giunti – drums & vocals, Giuseppe Viesti – percussions.

So, since places that do sell records around my place do not exist anymore - engulfed by the net  and all that jazz, yes - I search online ... find something ... although not available yet, same old drama when it comes to independent music productions ... and then ... extrema ratio ... I decide to send a “desperate” email using the contact form found at Rio Mezzanino's, asking where I would be able to buy their works. For sure I wasn't expecting their answer, at least I wasn't expecting such a rapid one ... guess what ... that night I check my email box and there it was ... sent using a cell phone even!!! Yay ... new technologies and their magic.


To make it short ... after a series of back-and-forth mails, in just three days' time I got two albums and a single of my “beloved” band ... sent to my office by ... guess who?... unbelievably by Oretta Giunti herself, “di pirsona pirsonalmente” Andrea Camilleri would say. I start listening to the music, I “rip” the cds - I'm just devoted to stuff in “liquid” format right now, someday, I'll try and give you a full report of my conversion to Pc-transport, provided that someone might be interested obviously - so, at last, I turn my stereo on.

I collect my first impression of “Economy with Upgrade”, first album published in 2008,  while reading the notes on the cover and while waiting for my already mentioned stereo to reach the right temp and work properly (audiophiles are maniacs, alright), all 13 songs - lyrics and music - are Antonio Bacchiddu's doing, while arrangements are Rio Mezzanino's. All english lyrics, brief and perfectly in tune with the music, few words, incisive and full of meaning. We start turning up the volume, focusing on the music.
After a first approach, others impressions did come, many others actually, since this album lately has become a pleasant lure everywhere, home, work, to the point I started neglecting their most recent production. Anyway, I've watched the  previously mentioned documentary film myself and discovered that Rio Mezzanino were special guests for the wedding the movie talks about.
This work sure reveals the influence of various genres and the musical taste of the authors, the album shows some sort of ideological education, born from noble european and overseas productions, you can effectively sense that Rio Mezzanino have taste, that they did their intense training through progressive, folk rock, tex mex, but more inclined to meditation and dark atmospheres. For example, in “Moquette”, I can catch a glimpse of The For Carnation's slowcore, tex mex and country influences for “Six Feet Under”, and post blues, neofolk and goth-rock for “Skin to Skin”, a hypnotic ballad with an obsessive and percussive crescendo, cocooned by the “cavernous” voice of Antonio Bacchiddu -a mix between Blixa Bargeld's (Einsturzende Neubauten) and Jerome Reuter's (Rome)- a voice accompanied by agonizing and insistent guitar riffs.

Various, never boring, modern and classic at the same time, a masterly mix of old and new, using acustic instruments, strings, Wurlitzer and electric instruments, narrator, chorus, that when mixed together let you fly to “alien” dimensions, without being alienated. Music that can be appreciated even when somehow distracted, because always pleasantly catchy, a music that reveals to an attentive ear its fine quality. “La stoffa non è acqua”, italians would say.  An international work for sure, deserving the attention from whoever can value independent productions, outside of the usual, pitiful mainstream and pop standards. Trying to give this album a specific identity isn't a simple task -impossible, even- seeing how many genres and influences are at work. Strongly, passionately recommended.