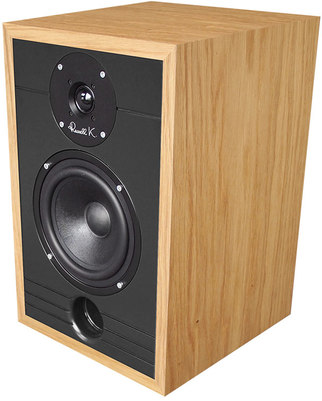 Russell K is a new brand for the Italian market, distributed by Mondo Audio. The designer Russell Kauffman is not a newcomer, he is well known in the High End industry.
Mr Kauffman worked in partnership with brands such as B&W and Morel. For Morel he took care of the Fat Lady system that I have listened carefully some years ago. It  is a very interesting system that some people consider kind of "naked" in its sound but in effect it is a sound without inappropriate resonances. Some people may wonder if the sound of the Fat Lady has been somehow recreated in the Red 100 that I am reviewing, well, I dare say “yes”.

The design of the Russell K has a peculiarity. Mr Kauffman says that the damping material used in the loudspeaker systems modifies the sound and some details get lost. Also the sensitivity is lower when this damping material is used. The Russel K are completely empty inside, no glass wool or other materials, only woody sides and in this way it is possible to manage the different resonances of the cabinet and harmonize it with the speakers. For this reason the Red 100 cabinet have different thickness. The front is 19 mm and the sides are 16 mm.

As for the crossover, the parts used are very essentials, one on each driver, with a frequency cut at 2.200 Hz.

The speakers applied are a 16 cm diameter treated paper woofer and a 2,5 cm soft dome  tweeter. The binding posts are very good and can be used with any termination. Their grip with spades is very good. The stated frequency response starts from 30 Hz but I do not think this is real. The low range is bass reflex loaded and has the port on the front of the cabinet.

The loudspeakers are proudly designed in Great Britain and built in Europe.

The finishing that you see in the picture is not the standard one, it is one of the many available (it is very beautiful with the matt wood and the grain of the wood well in evidence).
You can choose among different looks that are on display on the producer's website ((http://www.russellk.co.uk). The price is different depending on what you choose and you can check it on you Country distributor's website.

I have privileged the Bryston for this review because it was enough powerful and its characteristics suited better these loudspeakers. 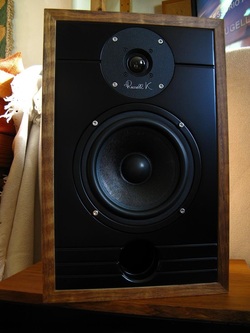 With these loudspeakers I think I have listened to one of the more credible reproductions of Saint Matthew Passion: the timbre was very credible, dynamics was present, the soundstage was very real. Every single voice maintained its timbre, its identity. The instruments are positioned on the scene with precision.

The sensation of truth in the voices is great; listening to the Tosca by Puccini in the recording directed by Colin Davis, the voice of Montserrat Caballé is very rich of hues, and all the details of the movements of neck and throat are detectable. The volume must be kept at a reasonable level, otherwise the mid low and the high range are emphasized.

I have noticed the same effect with the Vier Lieder by Richard Strauss  sang by the immense (my personal opinion) Jessye Norman. The voice, the woods and the strings are beautiful. Only the brass instruments are a bit too much and the low range is not as evidenced as it should be. 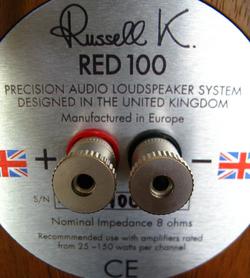 Very interesting is the comparison with Stravinskij's Oiseau de Feu in two different versions: one is the recording by DGG directed by Boulez and the other one is the recording by Decca directed by Dorati. The first recording is very dynamic but listening carefully you realize that when the energy is at its peak the instruments are not well defined. The recording on Decca is more natural and there is no distortion or confusion. I have often read that DGG Boulez must be considered as a reference but I am afraid that this is just something on principle, because the recording is enjoyable but is very far from an ideal perfection.

The low range is short and with the big percussions it is in strain.

Well, after the great interest for small loudspeakers, some years ago, many have considered again big loudspeakers, and of course there is a reason for this. A small loudspeaker is easy to position in a room and may be well set, but it is small and cannot perform as a big one. If you listen to the the Ode to Joy you will not have a live effect; the Third Symphony of Saint-Saens will not be as powerful as it should be. 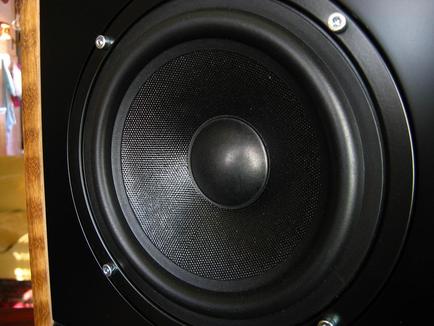 Listening to the trio for piano, violin and violoncello by Haydn performed by the Beaux Arts Trio has been a pleasure. The timbre was beautiful and the Red 100 easily followed the dynamic excursion.

I have recently bought a record with music by Chopin played by M°Massimo Gon (Velut Luna). This is a record that everyone must have - in my opinion - because the recording is excellent and dynamics is overflowing. I have listened to it with my system and also in Angelo Jasparro's new and bigger listening room and the outcome is really impressive. The instrument sounds real.

The reproduction of this recording with the Russell K is convincing: too bad that the piano player's left hand is deprived of much of  its strength  - and in the recording does not lack in strength - but on the other side there is a good dynamics, a nice soundstage and a fine instrument timbre reproduction.

In some conditions, the top range might seem too bright, but it is just because there is not an heavy low range to counterbalance it. This is something that must be evaluated on site with your system, because if you have an amplification that has a warm sound, the Russell K will not be too much focused on the top range. These loudspeakers are meant to me neutral and what you connect to them is really important and matters.

I have used two different set ups and the results on its transparency are clear to me: with the big system there is a great precision while with the small system is less precise and "romantic". All in all the set up with the small system was preferable because it enhanced less the attitude of the Russell K. 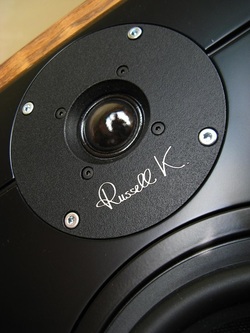 I have tested the low range with the well known Time Out by the Dave Brubeck Quartet, that in the Classic Records version on vinyl 45 rpm has a very confused low range. With the Red 100 the bass is acceptable, it is not deep but supports well Paul Desmond's sax, the drum and Brubeck's piano.

With more recent records, the result was different. In the CD Tourist by St. Germain (Blue Note) the top range is highlighted and at a high volume the listening becomes fatiguing.

Master Blaster by Stevie wonder lacks some impact in basses but maintains its beauty and simplicity in the voices.

As for the power, the 60 watt per channel of the Bryston have been enough during all the tests, even when I exaggerated with the Nightbirds by Labelle (that contains the original version of Lady Marmalade). I reached soon a high pressure but the two LEDs did not indicatel the clipping.

Today we can find on the market good amplifications for as much as 500 euros. The Russell K deserve more than this but there is no need to spend a lot of money to have good results with these loudspeakers. Of course these loudspeakers will not shake your walls when you listen to a pipe organ or to a bass drum, their woofer is too small for this.

The price: 1.990,00 (Italian price, including taxes) for the couple of loudspeakers with the woody finish I have. It is a medium price for a good loudspeaker, one of those you want to keep for a long time. These Russell K have the attitude that I like, that is to say they play well at a low volume, a volume fit for an apartment also at night time.

The two 60 cm stands may be also those that you can fill ad libitum; those too heavy and dull influence a bit the high range. A test in the shop before buying it is mandatory.
A new product, serious, that sound good, and that shows its quality but also its downside; but above all, a lot of good music. 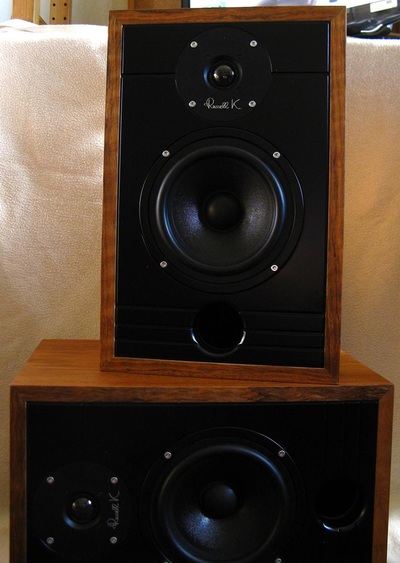 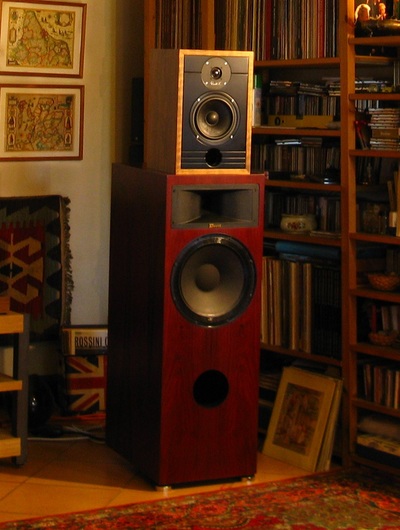