VAC is one of those products that arouse audiophiles curiosity and their desire of possession. I do not think this is just because it is expensive and unattainable for many, but because its sound is really convincing. Rarely, or maybe I should say never, someone has listened to a system with a VAC amplifier and remained dejected.

At every hi-fi show I meet someone that suggests interesting listenings; Mondoaudio (the Italian distributor of the American brand) is one of the boots that has most references, these VACs always leave the listeners satisfied. I usually go the room, listen and come up to the same listening results. My experience with VAC goes beyond the listenings in the show, because I have listened to them in different and more controlled conditions; when connected to Angelo Jasparro’s system for example and I have found out that these VAC are vacuum tube amplifiers but deny every single fault that the tube detractors affirm. These VACs have the clear and clean mid-hi range that all the classic valve amplifiers have but do not have the colorings of the vacuum tube amplifications that pack our audiophile world and that create a long row of detractors.

The cost is high but this no news. If we compare this price with the English or Japanese competitors we find out that it is absolutely adequate to performance and finishing. Maybe there aren’t any gold nuggets or silver and platinum threads but its sound makes you calm and serene and makes you forget about all the audiophiles manias.

It’s a very nice product, well built, well finished, and … big. It weighs more that 30 kilos and has 86 watts for each channel. This power drives efficiently my Audio Note AN E SPx but would do a great job with any other loudspeaker.

The device has 3 inputs besides the MM Phono; a balanced input and the MC Phono input are optionals. And then there is the “by-pass” circuit for the Home Theatre and a preamplifier input that allows the use of the VAC only as a power amp for multichannel systems and stereo systems. The loudspeakers outputs are 2-4 and 4-8 Ohm. The differences are not so evident but I preferred to use the outputs with more power with the AN E Spx, because with the other outputs the low range seemed a bit less defined. It has 4 KT88 valves working in triode mode. There are also four 12AU7 valves and three more 12AX7 valves.

The logo on the front panel can be switched off and some people say that it makes a difference but I haven’t heard any to be honest.
Moreover I like the logo light on … it makes you understand that the device is on and you can prevent dangerous connections.

The sound of the VAC made me forget all of the sudden its weight, that I had to carry up four floors stairs.

The distributor’s web site, and the manufacturer’s one, give a wide range of information on the valve’s choice, on the origin of the VAC firm, on the VAC team collaborations with famous partners. I suggest to read it because you’ll find out useful and unusual pieces of information. For an instance, you can read that the copy of the Model 9 by Marantz, in the mid 90’s, was made by the same people that today produce VAC. It is also interesting to read about the production philosophy that prefers to use modern valves, made in China, even expensive stocks, than the NOS, even if the NOS are put on a pedestal by all the audiophiles.

After reading the website you’ll have very clear in your mind that everyone in VAC has ambitions, ideas, a solid culture and wants to stay for a long time on the market … a handy information for those that want to buy their products. 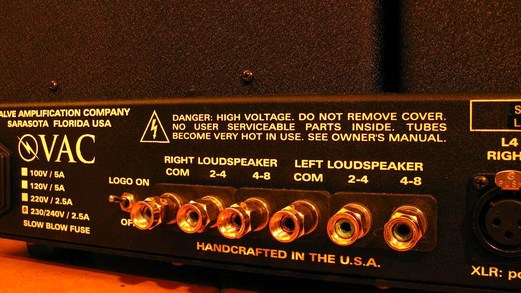 
When something surprises you, you don’t feel like talking about it too much because you are afraid of being somehow pulp. When you listen to this amp a part of the signal we are used to hear disappears leaving a bigger space for the recording’s details. Or at least this is what happened in my house.

I listened to known recordings for this review and at first this made me think that this amplifier had a problem while in reality it was a problem of the recording itself. But let me explain. In short this is what happened: Angelo Jasparro came to my place for dinner and to help me set up the device. We worked on the valves, connected everything, controlled the bias and then began to listen to music. I had on the DPS turntable the “Concert n°2 for Piano and Orchestra” by Brahms, a recording of the 70’s, one of the first PCM. When the stylus touched the groove we let it play for ten minutes and then I said: I don’t know if I could live with this sound. It is not extended, the low range is redundant and it is very focused on the mid range. Angelo was even more perplexed than me because he obtained with his JBLs and other VACs completely different results.

I took another LP. A Harmonia Mundi directed by Philippe Herreweghe “Cantata BWV 78” by J,S Bach “Jesus der du meine Seele”. I was stunned. What happened? Now the sound was simply beautiful.
The explanation is just as simple as this: the Denon recording was not correct, while the Harmonia Mundi recording was OK. Or better said, the Denon recording was the reflection of an acoustic of the 70’s in a theatre full of wooden panels and carpet while the Harmonia Mundi recording was much more similar to a listening in a church. From that moment on we started with a real listening session that we did with a renewed interest. I was almost forgetting, the amplifier was already burned in and therefore it was ready to play at its best. I said before that the sound is beautiful but I should have said that everything had a live sound as a recall to all the concerts I attended and to the many live performances I have done myself.

I have a real need to listen to live music sounds: I cannot stand the sound that are muffled, sweetened, coloured and that take me away to what I am used to listen as a concertgoer.

I am not saying that I try to have the Musikverein in my house but there is a sound that is very similar to the live sound and this brings you closer to a love for real music rather than to a sterile love for all devices and audio in itself. 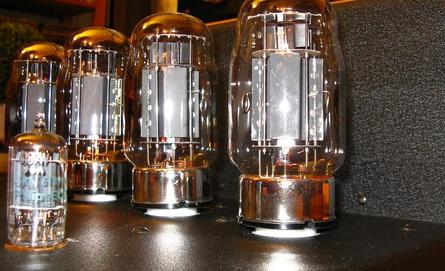 The example before mentioned is suitable for all the listenings that I have done. No matter if they were SACD/CD or vinyl LPs.
I use always the same recordings to test the devices to be more accurate.

I can say that the “Vespro della Beata Vergine” By Monteverdi on (Gardiner/Archiv) is a bit sharp when it comes to voices for the high pitched notes, something that I had not noticed before in such a clear way.


The “Ode For The Birthday of Queen Ann” and “The Anthem For The Foundling Hospital” by Haendel (Hogwood/Oiseau Lyre) are a bit too much opened when it comes to acute sounds.

“The Départ” by Rihm ( Wienmodern/Abbado/DGG) is almost perfect and anyway one of the most accurate recordings that I posses.

The sound of the woods in the “Fratres” by Arvo Part (Naxos) is the sound of instruments played in a modern concert hall, a shiny concert hall I’d say.

I was really surprised by the listening of the Haendel’s Messiah on Oiseau Lyre directed by Hogwood. I have listened to it hundred of times, thousands may be. But for the first time I have heard a distribution of the choir between the loudspeakers with a great precision and sense of reality. It was just like having them behind the loudspeakers … The soundstage is not one of the parameters that are very important in my opinion but when it is reproduced in this way, well it’s very enjoyable.
In this recording I have found credible timbres, correct dynamics and a very simple plainness (in the meantime I have heard about the passing of Hogwood and this made me very sad because of the many memories I have).

This penchant for a clean message and this attention for the details is not something that has an end in itself and is not referred only to classical music.

Listening to the LP “The King” with Benny Goodman playing the clarion evidences the bent towards a clear sound both of the cymbals, the guitar or the trumpet … it all has an allure that takes you close to the real musicians.

The same result we obtain with other recordings and I am referring to “Time Out” by the Dave Brubeck Quartet or to “A Night” in Tunisia by Art Blakey and The Jazz Messengers on Philips.

When we have a recording that is of a very good quality, like Classic Records vinyls, and especially Duke Ellington and Louis Armstrong’s LPs, all the curtains disappear and a live like sound magically appears.

Well, I’m not really into modern music but the good recordings of modern music have a penchant towards big dynamics so the listening to “Brain Salad Surgery” by Emerson Lake & Palmer or to “Selling England by The Pound” by Genesis and “Making Movies” by Dire Straits is amazing. In the first part of the song “Tunnel of Love” there is a barrel organ playing and then the whole group blows with the force that you expect from this kind of music.

All in all the hours I have spent with this VAC have gone by gladly. I put it up three weeks in my house but I wish it stayed longer.
My system is not bad at all but this VAC makes things accurate and into focus.

Its attitude is not of a smart aleck but it’s more of someone that is very polite and cultured. It makes you reconsider your beliefs, makes you ponder.

This is a device that must be listened to, no doubt about it. 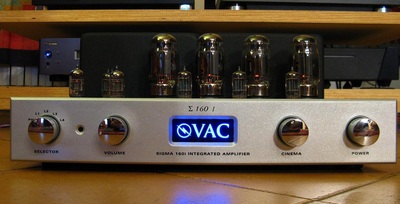 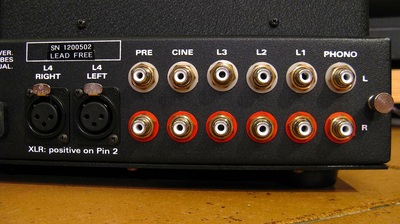