Oh no! Why are you speaking about a power amplifier that is 30 years old? There are so many novelties on the market ... Yes it’s true, it’s all true. But it happens sometimes that certain listenings leave you with such a nice memory that you keep on thinking about them, and then this memory is confirmed every time you listen to that particular product. This is what happened with this power amplifier.
I've had 3 Bryston amplifiers 2B-LP; I sold two of them and I gave one to my nephew who uses (“used” it would be better and you'll understand why later on) with a pair of Tannoy Definition 500 loudspeakers with great satisfaction (the "boy" is a rocker, one of those that like to "hit hard", just like Angelo Jasparro is).

The background. As I wrote in my review of the Ortofon Quintet Black, I recently replaced my Audio Note AN E Spx speakers with the Davis Acoustics Monitor 1; as for efficiency we are not very different, even if the Monitor 1 are more efficient than the AN E; a little different is the timbre. Of course, as it always happens when you change a component and especially the speakers, the search for the right amplification starts anew. At first I used the Wyred4Sound that sounded great in the midrange and the upper mid range, but a soft glow remained in the mid-low range.

Then I tried with valves of various types and shapes; in most cases the bass seemed a bit depressed (they were almost all single-ended). Then my friend Gabriele Serpentino (who is not a manufacturer, but that makes equipment for its own exclusive use, and won also a DIY "contest"), brought me one of his amplifiers: a single-ended 300B. An excellent device - particularly beautiful are the strings, and the sensation of "real live music" is something that I have rarely achieved - but unfortunately it was not powerful enough. Finally I recalled the 2B-LP that is small and somehow modest. I played it long ago with a couple of Magneplanar MG 1.6 and I played it also with the Dynaudio LS S 5/12 in the Pro version without any problem.
So I asked Audioreference (the Italian distributor) to have a new 2B-LP for a trial. And the distributor, in a few days, kindly delivered it to me.

It should be said that the 2B-LP is part of the professional line and therefore is not exactly designed for an audiophile use; long ago Bryston produced a "standard" version with RCA connectors; but in fact the 2B-LP has only balanced connections (both with Cannon and headset-like jack) and has no power button. Either you use a power strip with a power switch, you leave it on all the time or you turn it off by removing the plug from the electrical outlet. 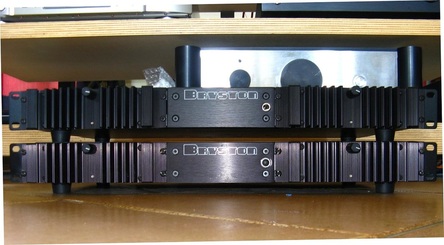 The input connections on the back are balanced as mentioned; near or around them are the IEC socket for the power cord, the switch for stereo/mono conversion, and the speakers binding posts; these connectors are extremely close to one another, Bryston has intelligently interposed a plastic tab that prevents contact between the cable spades, no matter what their size is; a solution simple and effective (I still remember the uncertainties and fears with the various Spectral that I have had in my house). In the front there are two separate gain trimmers for the two channels that act as the volume in case of direct connection to a source such as CD or DAC and a headphone jack, as well as the LEDs indicating that the unit is on, and that, when the colour changes indicate that the total rated power was exceeded.
The differences with the old models (in the photo you will see two because the one with the headphone jack is new and the one without is old) are only two. The old devices did not have the headphone jack and the power cable wasn't removable.

It’s heavy despite its size and has a power output of 60 watts per channel on 8 ohms and 100 watts on 4 ohms. With the Davis speakers, in a normal home environment, it is even too much (same thing with the ANs I had before). Obviously the amplifier is solid state and the layout is dual mono.

Now, one could say that aesthetically the 2B-LP is nothing special, but personally I find it pleasant and then it is so small that it almost disappears from your view; in fact, being black, you see only the two LEDs that confirm it's working.

After listening to the 2B-LP that Audioreference gave me, I called my nephew to tell him I was listening again to the 2B-LP that is a nice device and that it was a pity he had sold it; my nephew immediately told me that he still had it at home and so we made a quick exchange. I have the Bryston now and the Wyred4Sound (which is surprising as in value for price and that drives the Tannoy Definition 500 very well) is at his place.

The system I have used to connect this amplifier is: Bauer Audio DPS 2 turntable, Mørch DP 6 arm, Lyra Kleos and Ortofon Quintet Black (besides the Denon DL 304 and S1) cartridges, pre-phono American Hybrid Technology -P; Lavardin C62 preamplifier; various amplifiers, as I wrote above; speaker system Davis Acoustics Monitor 1 (as I call it, "the horns that do not sound like horns”); and the usual wiring that I always quote.

I must say that this amp has little need for heating, it sounds well as soon as you turn it on. However the new device after a week of use (three/four hours a day), suddenly changed its sound, settling on what was then the definitive sound; when new, in particular, it has a mid-high range a little backwarded, different from what I remembered this power amp had. Anyway after one week, the sound is - so to say – "straightened". 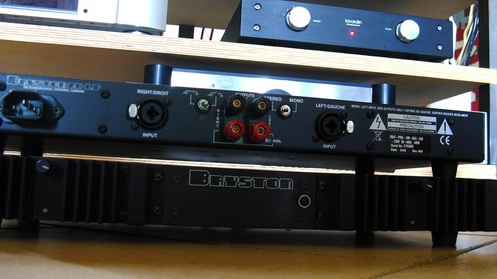 How is the sound of this amplifier after all? Smooth, clean, dynamic, there are no peculiarities that one might like straight away and then, after a while, dislike. The matching with the Davis Monitor 1 is excellent and from this union a natural sound comes out. The 2B-LP has a special attitude towards the mid-high range and the sound of the piano; the organ and the woodwinds are special. And this is very good because the woodwinds, in the recording and audio playback do not sound as good as they should or as they sound in a live session.

Listening to the Cuban Overture by Gershwin, conducted by Lorin Maazel, all the percussions sound accurate, precise just like it is with different horns and woodwinds; but also the strings are tonally correct and only the bass drum has a weird sound; but the fault is not of the small amp, it is a recording issue. The Davis - that as I said are very efficient - show the dynamics of which the little Bryston is capable and let him express its skills. They can easily reach high sound pressures that are similar to those reached at the Auditorium of Milan and the differences are clearly due to the environment (my house is not the Auditorium) and the recording.
Listening to the 1979 New Year's Concert, directed by Boskoski, Decca Digital, I hear clean and natural sounds in all the orchestras. In the fast polka, "Auf der Jagdt" gunshots are very violent, especially the first sound very real but also the rest of the orchestra sounds great. In that recording the only instrument that seems somehow deprived of his power is the triangle, that has a good sound anyway.

The open mid-high range is perfect with the the piano sound; listening to Brahms played by Ivo Pogoleric (DGG) was a very nice experience, it was just like having the piano in front of me (and the experience of listening to the Rhapsody in G minor op 79 no. 2 was really something).

And for better or worse I have compared these performances with those of other amplifiers and also with those of other speakers, as with the small PSB Alpha B1 (my backup system but also a speaker that is cheap and sounds in a very neutral way) and with the most difficult Graham LS 5/9 that in the meantime I have received from the distributor (many of you have seen the pictures on Audio-activity Facebook page). Is it true that the Grahams are not very efficient, but with the 2B-LP I never had a lack of power; they always performed well with all the possible coupling and genres.

Obviously newer appliances may have less grain in the sound, sometimes a higher speed, perhaps a bit of that sophistication that sometimes deprives the sound of some of its features.
It is also true that often the excessive age of the design determines the end of a product; but this is absolutely not the case. Of course, comparing my old model and the new one I noticed some slight differences in favor of the newer model that has a slightly better top range than the old one and a more tonic low range, but it could also be a matter of age for the device that belonged to my family.

In any case, if you need a small power amplifier that does not suffer neither from too difficult loads nor not too high speaker sensitivity, I suggest you to listen to it at home. In a well-known shop in Milan, I had the opportunity to listen to the LP-2B (new release) with a pair of Martin Logan and I can guarantee that the listening was amazing (and surprised even the shopkeeper that being young, had never had anything to do with this “little monster”).

Now the cost (in Italy) is € 2950.00 that are not exactly few; but with Bryston you must always take into account the twenty-year warranty and the fact that Bryston products last years and years without any issues (the experience Angelo still has with his tireless 7Bs is a demonstration).

Anyway, for those who do not know this device (and for those who are unfamiliar with Bryston), it will certainly be a nice surprise.