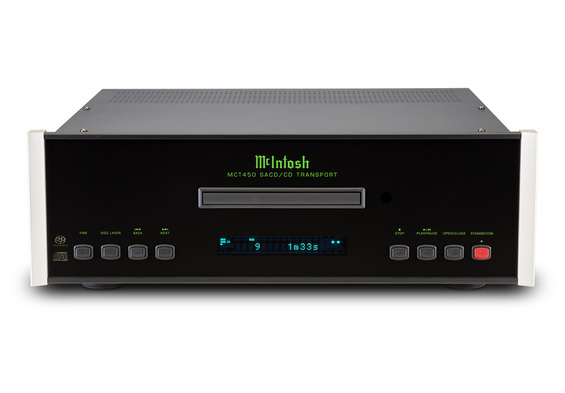 While pleasantly talking with an important Italian hi-fi dealer we discussed also about the fact that many audiophiles think that a product must have a good sound, and aesthetics is not so important after all.

For this reason we see many ugly devices that cost a lot of money; the idea is: the uglier they are, the better they sound. All this sounds silly to me.

Why shouldn’t we have a device that is beautiful and that sounds good too? Why shouldn’t we have something nice to touch and well refined? We have five senses but to please these three (hearing, touch and sight) is more than enough. And if someone wants to sniff or taste the devices please don’t let him do it! It’s not safe.

Whenever you spend your money you want to be fully satisfied therefore it’s important to choose something that has a good look too. McIntosh aesthetics does not please everyone but nobody can say that they are produced in a cheap way. That is to say that we have the typical American opulence versus the British essential look, for instance.

We need a little hedonism because in life there are already so many bad things that we do not need others. Let’s award those producers that put on the market products that are well done - under every aspect and in every field - and that make everyone proud of it. And if the difference in price from something well done and something sloppy is small, we shall rejoice. On the contrary, if there is a big gap we have to evaluate carefully the opportunity of such a buy.

We wanted to test the new digital source by MacIntosh. It has just arrived in Italy and we are so lucky to have it here for a review.

We have just published the review on the DAC/preamplifier D100 and here it is the new D150. Someone says that it’s the D100 with an upgraded digital part, in order to play any kind of files. We have opened it and we will show you that the two devices are very similar. The difference lies in the capacitors that are different in the output stages. If you like you can compare the two pictures following the link of the previous review.

During the 2015 CES in Las Vegas, both the Digital Preamplifier and the MCT450 have been presented as a world premiere. What’s special in the latter? Its main feature is to transmit the DSD signal while playing a SACD to a separate converter. For license reasons this can be done only through a proprietor link and so they have done. They have created an output on a DIN plug with a cable that takes the digital flow to the DAC. This is an expensive technology and there are only few brands that use it. I can recall by heart dCS, EMM Labs, Accuphase, MSB. 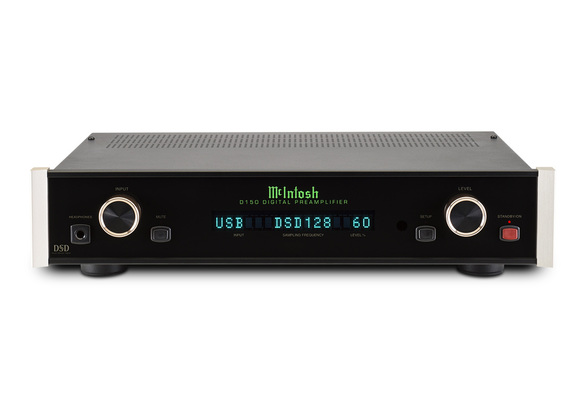 As you know I love SACD and every time I find interesting music in SACD I buy it, preferring the DSD to the same version on CD. I can affirm that nowadays I would not buy a device that does not allow me to listen to SACD. For me it is fundamental.

As soon as I found out that McIntosh had a new device with separated transport and DAC I called the Italian distributor to have it for a review. The first device that arrived in Italy stopped right here in my room for almost a month, it had a nice burn in and I listened to it with the utmost tranquility.

Before I speak about the listenings I want to describe these two devices. The MCT450 transport can play both CD and SACD. There is also a multichannel option but for this you will need another DAC because the D150 is only stereo.

The cabinet of the 450 has the usual and fascinating McIntosh look that is easily recognizable also without the blue Vu-meters. In the upper central part there is the brand illuminated by a light green optical fibre. Right below there is the metal drawer that is pretty silent. Below there is the light blue display with a dimension that allows you to see also from a couple meters. It shows what is playing, the playing run time and if it’s a SACD the title of the song and of the record. Many black buttons enable all functions that are controlled also by the remote. The remote is in plastic and it is well done; it seems better than those of the past. The front panel is as usual made of glass.

The transport has digital outputs XLR, DIN, Toslink optical and coaxial. There is the IEC port and the usual proprietary controls for the connection to other McIntosh devices. 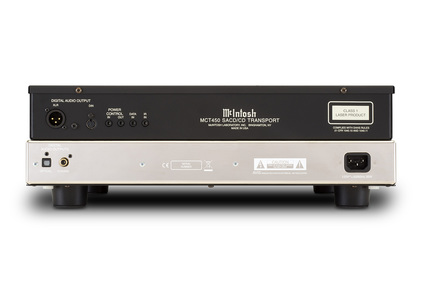 The D150 has the same chassis of the D100, exception made for the DSD logo on the front panel. Therefore: headphone output, knob to select the inputs, mute button, big display readable from the distance, a button to program the available functions, a knob to control the volume and a red button for the stand-by.

The back panel is very crowded. IEC port, controls for McIntosh proprietary connections, 2 optical inputs, 2 coaxial inputs, 1USB and 1 DIN. The outputs have a variable and fixed configuration, balanced and unbalanced. The variable configuration is to be used when the D150 is used as a preamplifier. There are no analogue inputs but there is plenty of digital inputs.


As we were saying before the DIN cable is like an umbilical cord between the two devices, it also transmits the DSD and SACD signal in addition to the normal PCM. The DAC reproduces the PCM up to 32/384 kHz and 128x DSD.
What more shall we ask? This is enough considering that the files available online with these characteristics are very few.

The headphone output supports impedance transducers up to 600Ohm, this is not so common and it is useful for those that have high impedance headphones like my AKG K340.

The instruction to use files coming from the PC is easy. The software used is the JRiver. I have used it too and I have found it easy. 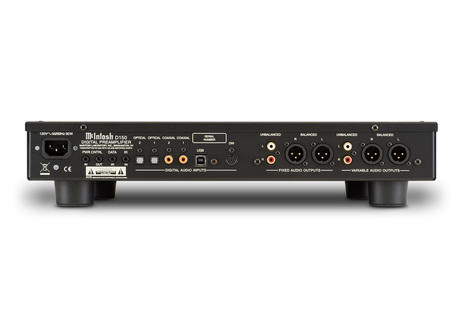 The first CD is “Lampo Viaggiatore” by Ivano Fossati (Columbia Sony Music). It is a recording with a good timbre and with swift transients. Sharp electric bass, quick percussions. I do not know the reasons behind a quick or less quick sound of a drum shot but this CD is soft when it has to be soft and swift when the author has decided so. This “Mac Couple” plays it perfectly and in the right way.
Where is the slow and soft sound often matched to these American electronics?

“Round About a Midsummer’s Dream” by Gianluca Trovesi Nonet (Cd Enja) is a beautiful CD. The music genre is not easily classifiable. The composer defines it a “musical journey”. The recording is exceptional and our source sends to the amplifier low keys of a very good quality. They are deep and well defined, almost analogue … and it is a compliment of course. I do not remember my JBLs playing such deep keys with this record. The dynamics of these two McIntosh seems to have no comparison!
The resolution is sufficient to listen the little background noises easily giving the sensation of a complete listening.

The “Missa Criolla” by Mercedes Sosa (Cd Universal) is a CD that everyone should have. It is one of a kind especially in the remastered 2010 version. The American electronic goes deep in the wonderful contralto voice of the singer. The result is stunning!

The Requiem by Mozart directed by Anton Armstrong (SACD Avie) is a real balm for ears and soul. The soundstage is very wide, the choir is well defined and you never have the impression of voices that are tangled or confused. The instruments of the orchestra are well defined even if the tone balance seems to lean on the mid-high range.

The “Flute Concertos - Mozart”, Sharon Bezaly (SACD Bis), evidences once again the ability of these devices to follow the transients and the ability let the sounds decay in a natural way.

The “Night on Bald Mountain” by Mussorgsky played by the Berliner Philkarmoniker directed by Claudio Abbado (CD DG) makes you turn the volume up and up. The listening is easy and pleasant.

This couple of players definitely has the sense of the rhythm. It is apparent while listening to “Girl Talk” by Oscar Peterson (SACD Universal). The recording by Hans Georg Brunner-Schwer gives us a pleasant piano and drum cymbals very accurate. The charleston seems to be right here between the loudspeakers.

I am satisfied and I would not connect the DAC150 to the PC if it wasn’t to give you a complete review. I want to check if everything works as it happened with the D100. The DAC immediately recognizes all the sampling frequencies sent via my MIT USB cable. The performances depend on the signal sent and they continuously improve as the signal improves. There are no hurdles at all.

It is not easy to describe the attitude of these two devices. The sound is not so perfectly defined but it is very pleasant and easy. The timbre is very personal. The high and low range are very beautiful while the mid range gives a very defined characteristics to voices and instruments that are located in this area. Maybe because the mid-low range is a little bit lightened. The highest range is very lively, never annoying and material enough to give an idea of reality.

I have had a real good time while listening. The personality of these devices is not easy but very interesting. I would have loved to have months and not just weeks to listen to them thoroughly.
And referring back to the incipit of this review I must say that i could not help watching these beautiful devices and their big and well designed displays.
The sound is branded McIntosh and this is a plus.
The price is perfectly in line with the quality of the product.

A personal note: when I have the chance to review devices like these I can only feel proud and grateful to do this job.
I want to personally thank McIntosh and its Italian distributor and also you my dear readers that give me the chance to speak and write of music and high fidelity. 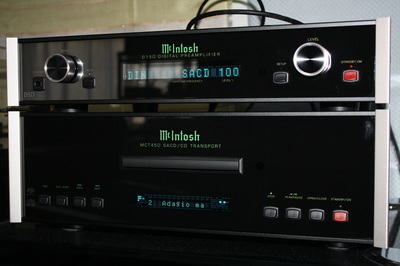 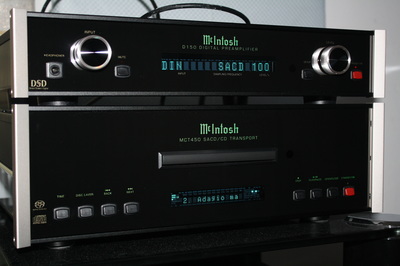 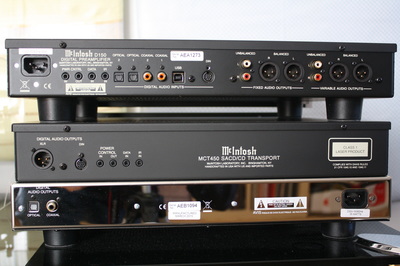 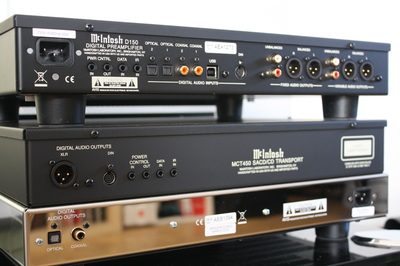 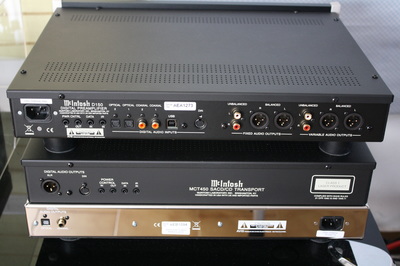 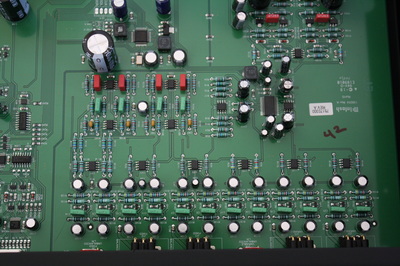 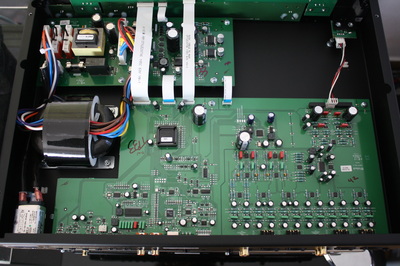 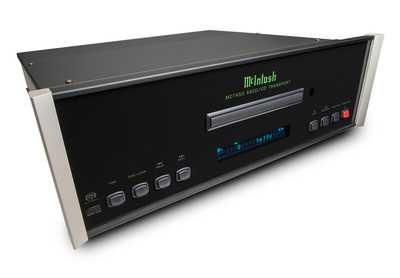 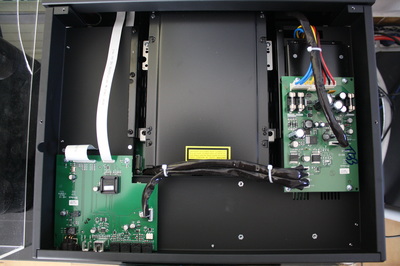